For Lydia Sorensen, a sophomore from Ada, Ohio, college is presenting the opportunity to discover new routes to achieve her academic goals. Similar to many students, Sorensen plans to pursue additional education upon graduation. However, this music and mathematics double major will use her bachelor’s degree to focus on an entirely new subject.

“It’s funny, every time I tell someone I’m a math and music major going into law they’re like, ‘Oh are you going to do copyright law?’,” Sorensen joked. “But my end goal is to be a judge, but to do that you have to be a lawyer.”

As her collegiate journey began, Sorensen auditioned for music ensemble scholarships with pre-law still her end goal. Intrigued by Bluffton’s music major, Sorensen was drawn to fully studying music. With an additional passion for math, Sorensen made Bluffton her home to juxtapose the creative and logical sides of the mind.

Using her double major, Sorensen plans to apply to law school and study defense law. Her interest in politics and law procedures began in junior high shortly after a trip to Washington D.C.

“In defense law, it takes a lot of creativity to problem solve situations that you’re dealing with, and that comes in with the music side. Then with math, the focus is logical which helps determine how to think about things critically,” said Sorensen.

On top of the ability to double major in such vastly different subject areas, people at Bluffton have also offered Sorensen a strong sense of community and encouragement. “A lot of the reasons people are drawn to Bluffton is because of the community feel. That’s certainly why I came here,” she said. “No matter where you go on campus, you feel like you know people and professors, and you feel comfortable with them.”

Sorensen encourages other students to explore all of the options and paths they can take to achieve their academic goals. “That’s the beauty of Bluffton,” she said. “Just because it hasn’t been done before doesn’t mean it’s not possible. It just means you need to try it and see what actually happens.” 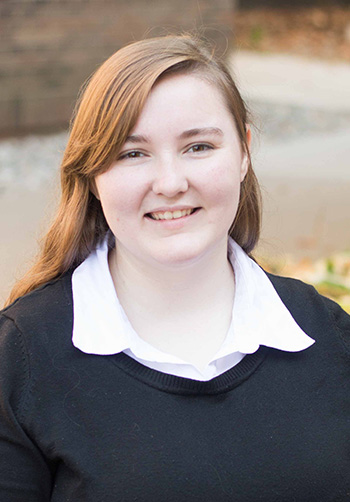 A lot of the reasons people are drawn to Bluffton is because of the community feel. That’s certainly why I came here. No matter where you go on campus, you feel like you know people and professors, and you feel comfortable with them.”