Freshman finds connection through sports and the spoken word

At Bluffton, Demetrius Terry ’20, a social work major from Columbus, Ohio, can often be found on the field or on the court, but he can also be found behind the mic. Both sports and poetry connect to play important roles in his college career and personal life.

“A lot of what I talk about in my poetry is about me and what I’ve been through and how football is a way for me to improve my situation in life,” said Terry.

Terry is a linebacker on the football team and assisted the cheerleading squad during basketball season. While Terry came to Bluffton to play football, basketball was his first passion. “I never played football until my senior year in high school.” However, as the sixth man, Terry found more potential behind the pigskin.

From the field to the classroom, Terry uses his everyday experiences to write poetry about the world around him. “Most of the time I write about stuff I’ve been through, stuff I’m looking forward to, and how I’m working to get it,” said Terry.

In his life, Terry has been through a lot. There was a stretch in middle school when his family was homeless.

However, he finds inspiration through listening to Langston Hughes and Maya Angelou. “When I heard their poetry and when they spoke, it was a way that I could escape my reality no matter how harsh it was.”

His love for the word began around the age of 11 and continued through high school. However, he never expected poetry to be a focal point of his college career. “When I got to Bluffton I didn’t think I was going to do poetry,” he said. “I didn’t think that was what people were going to see me as. The first time I took the mic here I wasn’t confident. I wasn’t confident with everybody looking at me. I didn’t think anyone would understand, would relate.”

However, he found an accepting crowd and found others who have experienced similar pain.

Terry is dyslexic and struggled in school. He was diagnosed in high school and got help there and here at Bluffton. As a future educator, he wants to help the next generation of kids like him.

“I figure that since others took the time to slow down and work with me, it’s only natural for me to also give back.”

As far as his poetry, Terry continues to share it because of the connection he makes with the listener.

“As much as you think it may not be good, as long as it means something that’s what the people are listening for. What does it mean and how can it help?” 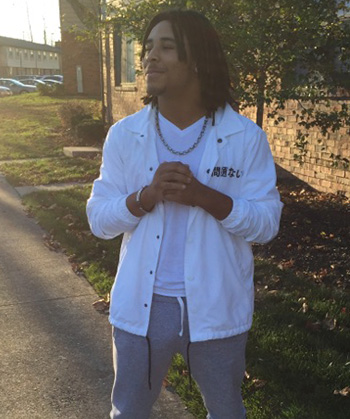