Phil Sugden, assistant professor of art, along with his wife Carole and two videographers, traveled to Havana, Cuba, to work on a video project that focuses on three dissident Cuban artists: Jose Vincench, Tania Bruguera and Jose Toriac.

“Hopefully, this will open up a door in terms of learning more about Cuban art.” Not so much the landscape and portrait painters he states, but rather, “the artists the government has tried to keep quiet. Their artwork is probably more powerful.”

Sugden is serving as the director and producer of the documentary while Carole wrote and conducted all of the interviews. The goal is to get the film distributed by PBS and included in independent film festivals. Sugden says this documentary, “focuses on their (the artists’) work and how it relates to the Cuban government’s stance on human rights toward their own citizens.  “I’m interested in how their artwork exposes these important issues to ordinary Cuban citizens and to visitors.”

Sugden says he decided to go to Cuba to, “talk to these artists while they’re still producing work that questions government policies, especially things like human rights, women’s rights, freedom of speech, freedom of being an artist.”

While in Cuba, Sugden said that they were free to go wherever they wanted to, and they took a lot of video of the things and environment around them. This is called B-roll which will be used in the final editing. However, the main focus was the artists and their studios. The group spent a full day with each artist, who were very open to speak about their about their work.

As far as favorite experiences go, Sugden says, “It’s inspiring just listening to these artists, and being in their studios and handling their work.”

The documentary is currently being edited and has a tentative title, “Art, Activism, Dissidence: Three Cuban Artists.” An anticipated release is expected for fall of 2016. 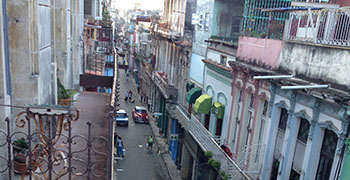 It’s inspiring just listening to these artists, and being in their studios and handling their work.”