Several Bluffton students heard stories of nonviolence from an unlikely felon and explored peacemaking methods to build a bridge between faiths at this year’s Intercollegiate Peace Fellowship Conference.

Held at Hesston College from Feb. 13-15, the conference focused on “Overcoming Evil: Ordinary People Making a Difference.” It featured seminars discussing ways to overcome evil with good by following Jesus’ example of peace, as well as a keynote lecture by the Rev. John Dear, a peace advocate and Nobel Prize nominee.

“The kind of nonviolence Dear is talking about is very active, where you are willing to put yourself in harm’s way in order to stop evil. But what you’re not willing to do is harm someone else,” he said, noting that Dear, a Catholic priest, has been arrested more than 75 times and convicted as a felon for acts of civil disobedience, serving a six-month stint in jail.

“The significance of the (conference) theme was to say that any person can live a nonviolent life and change the world,” said Katey Ebaugh, a first-year communication student at Bluffton. “Gandhi was just as human as we all are, but he made an incredible impact through his nonviolent life.”

“Nonviolence begins with ordinary people, and then grows to become a societal and structural reality,” added Emily Short, a sophomore majoring in biblical and theological studies.

She felt particularly moved by a seminar about interfaith relations, led by a Mennonite pastor and his Muslim friend. The pair spoke of projects they designed to break down barriers between Christians and Muslims in the U.S., and how others can learn to facilitate cooperation rather than conflict.

“The experience of hearing the two men talk about their desire for peace between the two communities and seeing the positive reactions of those in attendance gave me hope,” Short said.

The interfaith relations speakers “made bold, controversial statements, which I think needed to be made,” said senior Amanda Hunsberger. “They promoted Christian relationships with Muslim faith and encouraged us to get to know Muslims as humans.”

Ebaugh echoed the significance of the interfaith seminar, noting that “it spoke to the fact that, although the different world religions have different paths, we all share similar visions. The speakers’ goal was to work together from where they do agree, and to break the stereotypes that easily arise and cause violence,” she said.

Neufeld Weaver, who led the Bluffton group and serves as P.E.A.C.E. Club adviser, hopes the conference moved nonviolence to the forefront of students’ thinking. “I hope that it’s a first step, or for some students a second or third step, on their lifelong journey toward understanding and practicing nonviolence,” he said. 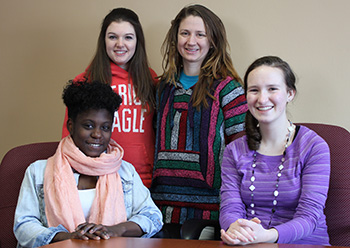 The significance of the (conference) theme was to say that any person can live a nonviolent life and change the world.”

Among those attending the conference were Malika Thompson, Katey Ebaugh, Amanda Hunsberger and Emily Short.