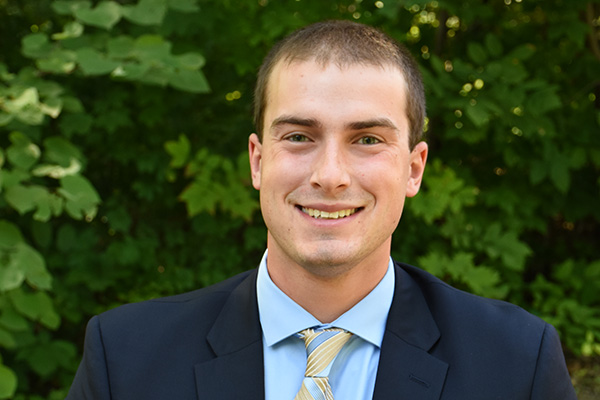 With a heart for video games and discovering a growing interest in esports at Bluffton University, senior Jeff Arnett is teaming up with Dr. Zachary Walton, associate professor of communication and avid gamer, to jump start an official esports club on campus. Arnett sees the club as key way to expand Bluffton’s core value of community.

“My dream is for the organization to be a place where people can get together, compete, play, mingle with each other and bridge every group on campus,” said Arnett, a physics and mathematics double major from Tecumseh, Mich.

Esports is a growing, team-based community that focuses on the organized and competitive playing of contemporary video games. At Bluffton, the group will play and compete through video games including Madden, Overwatch and Rocket League.

“It’s been a very long process, but I’ve enjoyed it thoroughly,” said Arnett of developing the club, which already has 40 students despite its official rollout in the 2019-20 academic year. “People have kept saying that I’m not going to get to enjoy it since I’ll be gone after this semester. But I know by doing this, I’ll have left an impact on the university that’s greater than the impact of me simply being a student, athlete or hall director. It’s something bigger that can be passed down.”

Walton is also excited about engaging current and future students through esports. “I really like what esports has to offer to prospective students that may not be interested in campus athletics but still interested in competition, teamwork and honing the skill of being in a community,” said Walton, who has taught a special-interest course on video games.

“The connection to academics is less than clear in a number of other universities’ esports teams,” Walton said. “I definitely like to say my participation can also offer the intellectual, critical and cultural perspective, as well. I don’t see those as separate from the competitive and community sides.”

Both Walton and Arnett are passionate about the completion of the project. Arnett’s dedication to the club will be well remembered. “Jeff is so passionate and he’s done so much work on this project,” said Walton. “All of the work he did will pay off for a lot of students in the future, and that’s really cool.”

While a permanent location on campus has not been finalized yet, the equipment is state of the art. Custom built PCs with gaming monitors, gaming mice, gaming keyboards, gaming chairs and gaming headsets, along with Xbox and PlayStation controllers for those who prefer a controller over a keyboard are available to members of the club.

Arnett encourages other students to offer ideas to instill change on campus.

“If you have some sort of idea that pops into your head and you think it could work, talk to people about it,” he states. “Whatever ideas you might have, don’t restrain them. See what can be done about it. Don’t hold back those ideas and ambitions.”