Beaver basketball is a family affair for Bluffton sophomore

For Andrew Renner, a math major with an adolescent/young adult education licensure, the saying like father like son applies to his college experience. The sophomore basketball player from Cairo, Ohio, shares not only an alma mater and future career path with his father but also a coach. In his 29th season at Bluffton University, Guy Neal has coached both Andrew and his father, Christopher Renner ’94.

Having family ties during a game can be beneficial. “It helps when my dad gives me advice on how to take things that coach says and how to respond to them because he’s been through it,” said Renner.

However, Andrew Renner says his father, a principal at Bath Elementary School, knows when to step up and when to stay on the sidelines.

“He wants me to try to learn for myself and, personally, I enjoy that,” said Renner. “I like when he tells me good job or gives me a little criticism here and there, but I also know he’s not trying to be my coach.”

When choosing a college, Renner was drawn to the welcoming atmosphere provided by Neal and the entire basketball team.

“It’s not only on the court but also off the court. Everyone is super nice,” he said. “The coaches are thoughtful, and they care more about us as people not just as players.”

Just as his dad did back in the 90s, Renner is building lasting relationships as a Bluffton Beaver.

“I think building a bond with your teammates and your coaches is important. I only have a few years left of basketball, but I’m confident these relationships are going to last me my entire life,” said Renner. “It’s like a big family, and I really enjoy that.”

In the classroom, Andrew Renner is also following a similar path as his father, an education major. He hopes to impact the lives of young people and sees AYA education in mathematics as his way to contribute to the community. He believes being a student-athlete will give him an advantage in the workforce.

“As a teacher, I’ll need to be able to work with people,” Renner said when considering how the principles of basketball will apply later in life. “Basketball is a game where you can’t get anything done without the rest of the team, and that’s a big factor in life.”

Renner adds that some of the biggest lessons he’s learned in life have come from Coach Neal.

“Coach Neal gives us a lot of constructive criticism,” he said. “Understanding how to use that criticism is important, not only when I’m on the basketball court, but also with future employers and having a better sense of what they’re saying in order to accomplish it.” 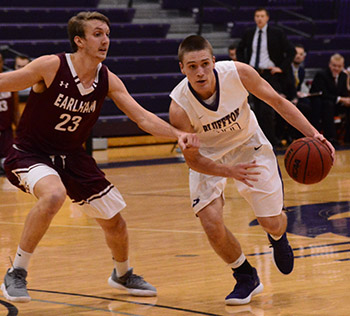 Just as his dad did back in the 90s, Andrew Renner is building lasting relationships as a Bluffton Beaver.