It’s no secret that Darryl Nester loves all things math—he holds a doctorate in statistics and is a professor of mathematics, after all. So, after discovering the hidden complexities of a seemingly simple board game, he programmed an online version of it that has recently been recognized by the game’s creator.

SET is a board game where players lay out a set of cards and compete to collect a “SET,” which consists of three cards that are either completely the same or completely different from one another. For example, three cards each featuring a pair of red ovals is a SET, while three cards featuring one green squiggle, two purple ovals and three red diamonds, respectively, is also a SET.

This appears simple enough, but an intricate game of probability lies below the surface. The creator of the game, SET Enterprises, Inc., notes that there’s a roughly 33-to-1 chance that a SET is present when 12 cards are laid face up on a table, for instance.

“I had learned of the game at a family reunion and recognized that there were some interesting math concepts that appealed to the math side of my brain,” Darryl says.

He was particularly intrigued by a variation of the game called “End Game SET,” where players remove one card from the 81-card deck at the beginning of the game, play until no SETs are left and then identify the removed card based on a process of elimination (the SETs already found versus the cards remaining).

On Monday night of fall-semester finals week—with his finals written but not yet given—Darryl decided to create an online version of the game, which he programmed using JavaScript. He then posted a link to it on the creator’s Facebook page. SET Enterprises Inc. quickly replied with gratitude and created a link on its website to Darryl’s page.

“The part that took a lot of time was having the computer simulate playing the game,” he explains. This included (virtually) shuffling the cards, dealing them out and finding the SETs along the way until End Game SET was ready to be played.

While the game may sound convoluted to newcomers, it’s simple enough for about anyone, Darryl says. “One of the things that’s neat about SET is that it’s a complicated and challenging game and mathematically interesting, but it’s also something that children can pick up pretty easily, too.”

Anyone interested in a deceptively simple game of probability, process of elimination and visual perception can play Darryl’s online version of End Game SET for free at https://www.bluffton.edu/~nesterd/java/setendgame.html. 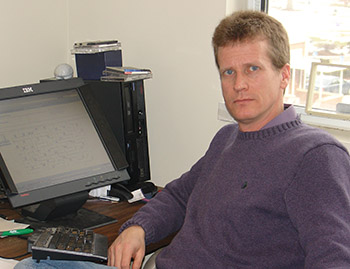 “One of the things that’s neat about SET is that it’s a complicated and challenging game and mathematically interesting, but it’s also something that children can pick up pretty easily, too.”