Director of residence life says relationships are his priority

Kevin Williams’ previous work with residence life at other colleges has helped prepare him to take on the role of director of residence life at Bluffton University. While he is eager for the school year to start, Williams admits what he’s most looking forward to is not the new job title but the relationships he will be able to build on campus and within the community.

“The students make the place what it is, as well as the faculty and staff. And as those two things are integrated together in August, I think it’s going to be wonderful. I have great anticipation and great expectations.”

Williams is no stranger when it comes to working in higher education. Previously filling the role of assistant director of residence life at Messiah College, Williams also spent seven years working as an admission counselor at his alma mater, Malone College. It was in this position where he realized he not only wanted to work in higher education full time but he wanted to grow as a working professional through mentorship.

“I believe in having people in my life that can mentor me. I asked my vice president to mentor me there because I saw a lot of qualities in him that I wanted to portray as a person. And through that mentorship, he encouraged me to look at higher education as a potential career goal for myself. Through that, I decided to pursue student affairs.”

When it came to deciding if Bluffton was the right place for him, Williams said that Bluffton being a Christian institution along with service being one of Bluffton’s four enduring factors were important to him, but the support and guidance of a mentor was also key.

Williams also wants to grow opportunities for mentorship on campus.

“I love mentoring and I love the opportunity to be in the places where students are. One of my goals personally is to be a visible person on campus so that I am known and not just a person that fulfills a role but a person that is around on campus and students know that I am here for them.”

Believing in this philosophy, Williams is planning on involving his wife and three young children in campus activities. “I think it’s important for students to see me not just as a person that works for the college but as a real person that has a life outside of my job and some of the way I believe I can do that is through bringing my family on campus.” The family is hoping to eat at least one meal a week in The Commons as a way to be part of the campus community.

Williams is looking forward to student move in days and to creating positive momentum in the residence life area by developing and strengthening the role of the resident advisor and hall director within the campus community. 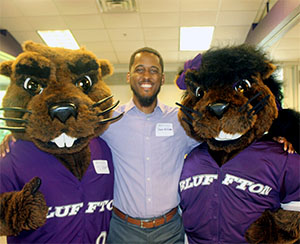 “The students make the place what it is, as well as the faculty and staff. And as those two things are integrated together in August, I think it’s going to be wonderful. I have great anticipation and great expectations.”