Majoring in chemistry, physics, mathematics and pre-engineering, Benjamin Black ’19 has a lot on his plate academically.

Black, of Deshler, Ohio, transferred to Bluffton as a chemistry major, but soon added both physics and mathematics to the list. With pre-engineering recently introduced to Bluffton’s academic majors, Black figured why not add one more.

“I looked at the three majors I had already and realized I needed just a few extra classes for pre-engineering,” he said. “The major is a little bit of everything I’ve already been doing with a few engineering classes, so I decided to work it out on top of my other three.”

Because many of Black’s science and math classes overlap, he is on track to graduate in December 2019, after four and a half years.

During the summer, Black works at Sauder Woodworking Company in their research and development lab, where he utilizes all four of his majors to solve problems and form innovative solutions.

“Part of our job is to be the ER of the company,” said Black. “If quality control has an issue they can’t figure out, they come to us. We sit there and problem solve and we try to figure out a way to fix it.”

In this role, Black also worked to develop innovations that turn waste, such as wood shavings, into useful products.

“This past summer, I worked on taking our wood shavings scrap and find a way to create foam that we could we could use for packaging,” said Black.

Having to return to school, he was unable to finish the initial project during the summer. However, the research team “got pretty far, and we learned quite a bit about what we can and can’t do with the material.”

While some students watch Netflix or go to Bob’s Place in Marbeck to relax after a week of busy classes, Black recently attended a mathematics conference where he learned about mathematical sculptures from George Hart and Elisabeth Heathfield, whose work strives to make mathematics accessible to all ages through hands-on projects.

Inspired by their creations, Black recently made his own geometric disco ball which is on display in the mathematics department in Centennial Hall.

“You just make a bunch of pentagons and put them all together and it makes a sphere. All it’s made out of is regular CD discs and zip ties,” explained Black. “The project teaches a geometry concept on polyhedrons. It is kind of cool seeing how everything comes together.”

Black plans to pursue careers in the research and development industry after graduating, offering him a technical community that he feels he thrives in. Similarly, the community at Bluffton has also provided an atmosphere in which to thrive.

“I just really fell in love with Bluffton,” he said. “I really enjoy the community here, and I wanted to spend my time in college in a welcoming community like Bluffton’s.” 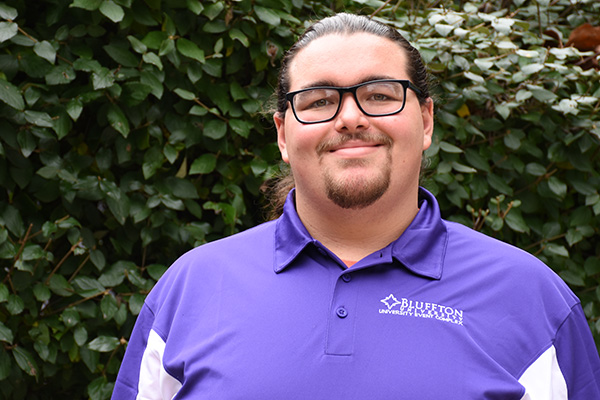 “I looked at the three majors I had already and realized I needed just a few extra classes for pre-engineering. The major is a little bit of everything I’ve already been doing with a few engineering classes, so I decided to work it out on top of my other three."