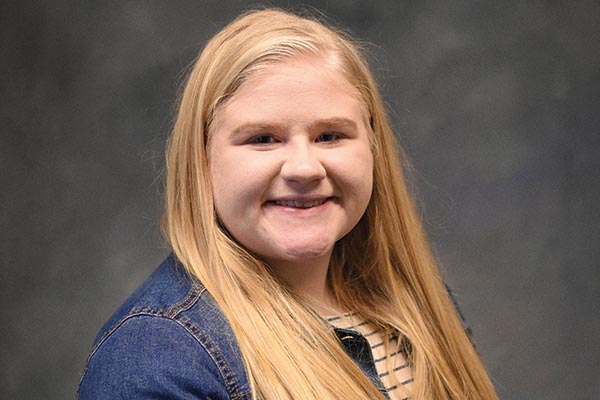 Payton Stephens ’23, a writing and communication and media double major from Lebanon, Ohio, came to Bluffton with the goal of seeing her name in print. She just expected it to be on the spine of a novel, not as a byline in a newspaper. Originally a writing major interested in fiction, Stephens took Social Media and Writing for the Media classes at Bluffton University and discovered a new way to pursue her interest in the written word.

“That was scary to me because I always wanted to be a creative writer, and I realized my future was all falling apart,” said Stephens. “But I also realized I actually might have a new, better path.”

Stephens, the managing editor for Bluffton’s student media organization “The Witmarsum,” is further exploring a future in journalism as a paid intern at “The Courier,” a daily newspaper in Findlay, Ohio. She started in March and is continuing part time through the summer.

“When I think of internships, I think of going to get coffee or lunch or being an assistant, but I’m an actual journalist there,” explained Stephens. “I have my own desk, I have my own phone, my own computer and everything. My boss tells me ‘I want you to love coming to work.’”

Her first major assignment for “The Courier” was covering the funeral of Bluffton Police Officer Dominic Francis. Originally sent to take photos, Stephens wrote the next day’s cover story. Since then, she’s done everything from typing up the police docket to writing a feature story on an accomplished bicyclist. She’s now pitching her own story ideas.

“I feel like everyone has a story,” said Stephens. “You just have to figure out what to look for or listen for.”

This fall, she’ll continue leading the staff at “The Wit” and will participate in “Bridge: The Bluffton University Literary Journal.”

“The internship experience has given me so many new perspectives that I can use back at Bluffton,” said Stephens.

In addition to pre-professional clubs, Stephens is a President’s Ambassador, Student Engagement Advocate and Becoming a Scholar mentor. She can also be seen on the stage as an actor and assistant in Bluffton theatre productions.

However, her favorite Bluffton activity is giving tours to prospective students.

“I love interacting with the incoming freshmen on Orientation days,” said Stephens. “I’m one of the first friends they make on campus, and when I do tours and send postcards back to the families it’s so satisfying. I feel like I’m helping someone feel more comfortable about coming to Bluffton.”

The sense of community that she is now helping create is what brought Stephens to Bluffton and keeps her here. She’s even contemplating continuing her career in northwest Ohio following graduation.

“It’s the sense of welcomeness; I felt like I truly could belong here,” said Stephens. “It made me feel at home.”