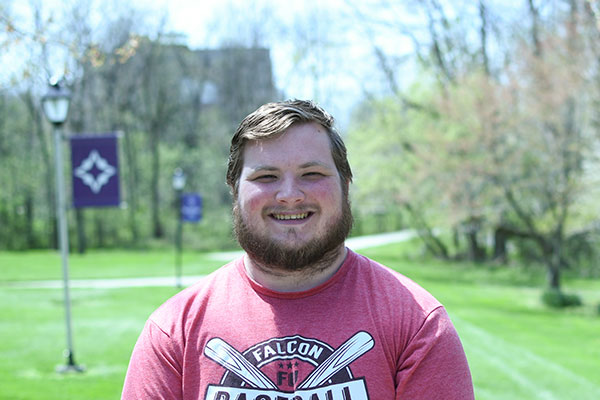 Involvement is key to McCafferty

Hunter McCafferty ’23, a primary P-5 education major and coaching minor from Bremen, Ohio, juggled his studies while also playing offensive line for the Beavers football team and performing in Bluffton theatre productions during the 2021-22 academic year.

To stay on top of classes, field experiences, Learning Resource Center hours, theatre practices and football practices/lifting, he managed each day’s schedule the night before.

“I try to be involved in as many things as I can, so I really have to work on time management,” said McCafferty. “It’s important to plan out each day carefully.”

During the week he performed as Giles Ralston in the spring play “The Mousetrap,” he considered dropping some of his involvement but chose to move forward with his busy schedule.

“I decided to stick it out for that week and the week prior to see how everything would work out,” said McCafferty. “It ended up working out, which I was grateful for.”

When deciding his major, McCafferty was most influenced by high school teachers who encouraged him. He also found enjoyment working with youth.

“It’s fun being with the kids— to get to know and work with them,” said McCafferty.

For his major, McCafferty is required to stack up field experience hours. The experiences are a way to make sure teaching is something he truly wants to take on as a career and to prepare him for a future in the classroom.

“You get to see different teaching styles,” said McCafferty. “You can pick what you learn from them and make it your own.”

During the spring semester, he completed field experiences at Bluffton Elementary on Wednesday mornings by helping second and third graders on their classwork.

The class which prepared him the most for field experiences was Phonics taught by Dr. Amy Mullins, associate professor of education.

“The education program was what drew me in [to Bluffton],” said McCafferty.