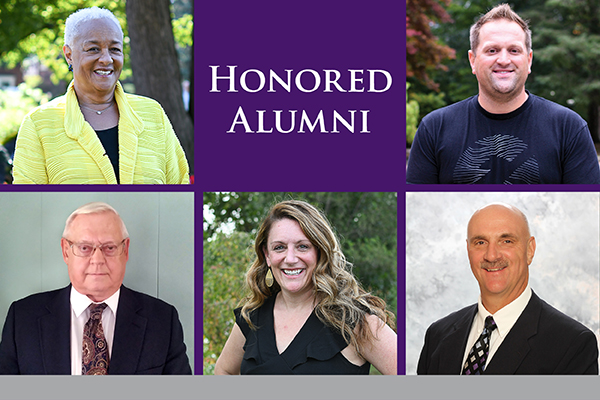 Exceptional Bluffton University alumni are honored each year during Homecoming at the President’s Banquet. During the Oct. 15 event, Alumni Awards were presented to Kathy (Gaines ’78) Carr for Lifetime Service, and Brandon Freytag ’08 for Outstanding Young Alumni. Three alumni, Ed Smoker ’63, Denny Phillips ’79 and Allison (Lange ’05) Bentley, were inducted into the Athletics Hall of Fame. 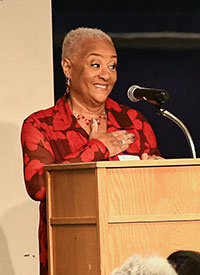 Kathy (Gaines ’78) Carr began her career with Fort Wayne Community Schools as a special education teacher in 1978. During her 40-plus years with the district, she continuously took on advanced responsibilities and served as a resource teacher, dean of students, principal, manager of recruitment and hiring, and director of human resources. She earned both a Master of Science in Elementary Education and a Master of Science in Elementary School Administration from Indiana University-Purdue University-Fort Wayne.

Carr has been active on many boards and service organizations ranging from the National Education Association to the Board of Directors for the Fort Wayne Rescue Mission. She has also served in leadership roles with Alpha Kappa Alpha Sorority and the Fort Wayne Alliance of Black School Educators among others.

The Lifetime Service Award recognizes an individual who has dedicated his or her life to heartfelt service to people, community or church. Inspired by personal faith in God and the ultimate purposes of His kingdom, this individual has made a difference in the lives of others. 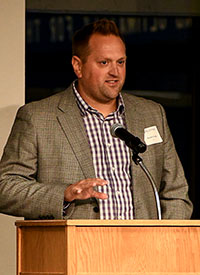 Brandon Freytag ’08 is the founder and chief of creative monetization at Loaded, a gaming management and advisory firm, which began in 2016. The Santa Monica-based company exclusively manages more than 30 content creators including Shroud, Courage, summit1g, Tarik, QuarterJade and Lirik. The company works with hundreds of additional gamers and provides strategy in the gaming space for major brands such as Adidas, Gillette and Frito Lay.

A member of the company’s executive team, Freytag oversees multi-million-dollar platform and content deals including gamer Ninja’s move in 2019 from Twitch to Microsoft’s former platform Mixer. Freytag has been the driving force behind more than 60 of these deals.

The Outstanding Young Alumni Award recognizes a recent graduate who has distinguished him or herself through service to people, community or church, or who has made significant contributions in his or her career. 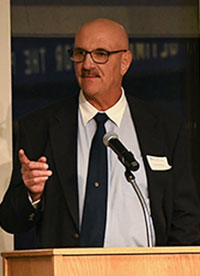 Denny Phillips was inducted into the Athletics Hall of Fame for his achievements in coaching. Joining head football coach Carlin Carpenter’s staff as a strength and conditioning coach in 1988 in a voluntary capacity, Phillips was promoted to assistant coach the following year. He dedicated 25 years to Beavers football and completed his final season in 2013 as the defensive backs coach. He also served as the special teams coordinator. Phillips was the defensive backs and strength and conditioning coach when the team shared the HCAC championship in 2000, the only time Beavers football accomplished this in school history. He was previously inducted into the Hall of Fame with the 2000 team.

In 1992, Phillips began coaching for Bluffton’s track and field team and served as head coach through the 1998 season. He led the Beavers to three AMC championships in his first four years as coach.

A 1979 graduate of Bluffton in health, physical education and recreation, Phillips was a four-year member of Bluffton’s men’s basketball team and served as co-captain in 1979. During his Bluffton coaching tenure, he was also a full-time teacher at Leipsic and Bluffton Elementary schools. He also coached football and track at the high school level. 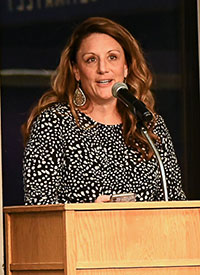 Allison (Lange ’05) Bentley, one of the best hitters in Bluffton softball history, was inducted for her individual achievements as a four-year member of Bluffton’s softball team. She was previously inducted with the 2004 softball team. Bentley was named to the National Fastpitch Coaches Association/Louisville Slugger All-American (2nd Team) and NFCA/Louisville Slugger All-American All-Region (1st Team) during the 2004 season when the team was ranked in the top 10 nationally in NCAA DIII for much of the year. She was also a two-time All-Heartland Collegiate Athletic Conference 1st Team selection.

In 2004, she was nationally ranked 5th in slugging percentage, 6th in batting average and 18th in doubles. Bentley’s name is all over Bluffton softball’s records book including career records of 2nd with 39 doubles and 7th with a .355 batting average and single-season records such as 1st for both a .522 batting average and .600 on-base percentage. At one point, her name was listed 30 times in Bluffton’s record books. She was awarded Bluffton’s Kathryn E. Little Award in 2005 for being Bluffton’s Outstanding Senior Female Athlete.

Bentley graduated in 2005 with a middle childhood education major and is currently a math/STEM/technology teacher at Archbold Middle School. She has coached a variety of high school, junior high and youth teams. 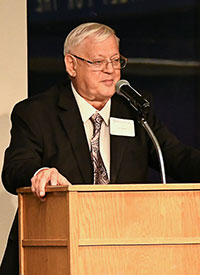 Ed Smoker was inducted for his achievements in football. Smoker was named All Conference for two years as a defensive back and standout tackler who repeatedly helped shutout opposing teams during the Coach Ken Mast era.

Described by Mast as “the best defensive back I ever coached,” Smoker played alongside fellow inductees Willis (Willie) Taylor ’58 and Elbert Dubenion ’59. He holds the record for most single-season interceptions in Bluffton history with nine.

Smoker graduated from Bluffton in 1963 with a business administration degree. He served as the purchasing manager of R.E. Jackson Company for 24 years and was the owner/operator of the Elkhart River Queen, which operates tours on the St. Joseph River in Elkhart, Ind. Currently, Smoker owns several properties in Elkhart, Ind. He is also active as a founding member of the Viking Ski Club of South Bend-Elkhart.