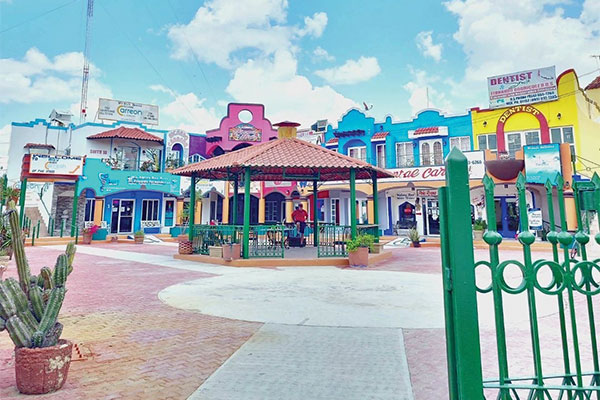 South Texas was just one of the destinations for short-term Cross Cultural Experiences in spring 2022.

During Bluffton University’s fall Cross-Cultural Forums, students shared about the history, hopes and challenges of the people and places in which they immersed themselves during the summer of 2022. Two presentations, featuring different cross-cultural opportunities, were held on Oct. 4, 2022, in Yoder Recital Hall.

Students completed service work alongside Serving with Appalachian People (SWAP) during the Kentucky experience. They learned about the social and environmental effects of the coal mining industry and were challenged to compare their own lifestyles, values, hopes and dreams with those of the people they met and worked with each day.

“We brought back memories of the mountains, the music, the art, the culture and all the welcoming people we met in Kentucky,” said Michael Lindhorst ’23, a mathematics major.

In South Texas, students experienced the diversity of San Antonio, the seventh largest city in the United States. The experience also included visits to social service facilities and speakers shared about Tejano art, poverty and discrimination.

The Southwest native nations experience included learning about the culture, unique histories and struggles of native people—specifically the Navajo and Hopi people. The experience also featured visits to several monuments, museums and national parks. A major component was learning about climate change and the scarcity of water on reservations.

“We learned that the southwest is a fragile and drought-prone environment. Over time, natives found different ways to adapt to the climate they’ve inhabited for generations, such as dry desert farming as an agricultural practice,” explained Darius Boeke ’24, a mathematics major, who shared about the Three Sisters’ planting method practiced by native people.

Students who traveled to Washington, D.C. discovered a city of dramatic contrasts—a place where staggeringly powerful decision makers work within sight of communities entrenched in poverty. They explored the city’s rich culture and entertainment while also exploring the realities of racial segregation and economic inequality.

“It isn’t until you step into a tent city right outside of Union Station, deep in the heart of the city, that you truly understand how big of a problem this is in D.C.,” said Britton Boyle ’23, a sport management major. “It is heartbreaking to walk by so many people in need, and I think everyone on the trip would agree that this was one of the hardest parts.”

Previously part of the Soviet Republic, students who experienced the Czech Republic learned more about the remnants of its socialist past alongside a newer capitalist mentality. Students also experienced getting around using public transportation such as trains, trams and buses.

“I was hesitant and out of my comfort zone at first, but my host helped me until I was acclimated and confident enough to go out on my own just like a local,” said Searra Hough ’23, a nutrition and dietetics major.

In Guatemala, students studied history and culture while living with host families. They also participated in excursions to Lake Atitlán, a region surrounded by picturesque volcanoes, as well as Cobán, a city on the Cahabón River in northern Guatemala.

In South Korea, Elle Price ’23, a primary education major, who traveled extensively and experienced locals ranging from the mountains of Jeju Island to Buddhist temples to the Demilitarized Zone.

Summing up the experiences, Edward Hardaway ’23, a middle childhood education major, shared this lesson: “With visiting any place, we are challenged to immerse ourselves into the culture and challenge the common norms that we are accustomed to.”

All Bluffton University must complete a cross cultural requirement for graduation. Most students meet this requirement with a semester-long or short-term cross-cultural experience.