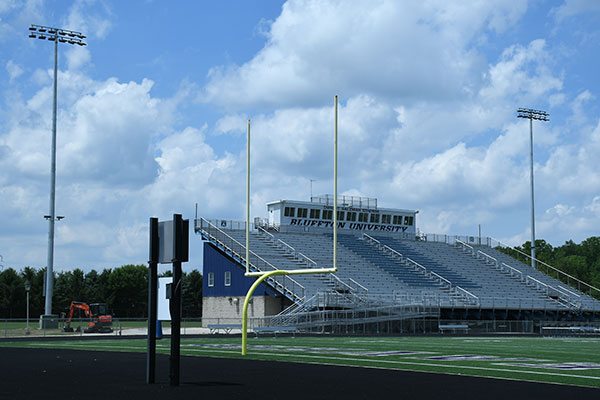 Stadium lights have been installed at Salzman Stadium. To maintain good relationships with neighbors, new outdoor lighting and noise guidelines are set.

Stadium lights have been installed at Bluffton University’s Salzman Stadium, and the university has set new outdoor lighting and noise guidelines for the facility as its usage increases.

The first game under the lights is scheduled for Bluffton football’s home opener at 6 p.m. on Sept. 17, 2022, against Adrian College. However, Alumni Field is also the competitive turf field for Bluffton’s men’s and women’s soccer teams and the practice space for several teams; some of which plan to practice in the early hours of the morning.

With the addition of stadium lights, Bluffton University also looks forward to potentially serving as a host site for area high school playoff games and other events.

Village of Bluffton ordinances involving noise and light were used in the development of these guidelines. Bluffton University looks forward to welcoming community members at evening athletics events.