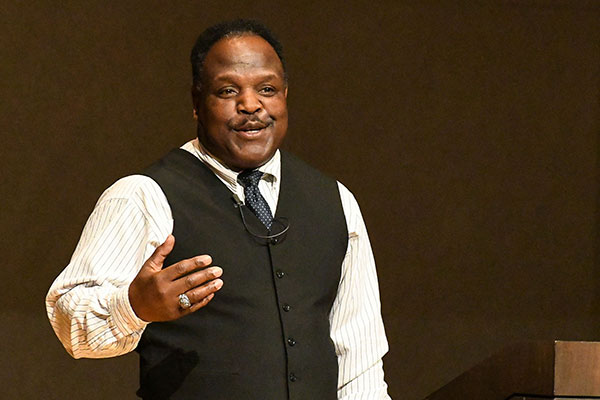 Clayton Moore described his experiences as the first black police officer in Fostoria, Ohio, and his fight against racial discrimination within the department.

During Bluffton University’s annual Martin Luther King Jr. Day Forum titled “Why Me?,” retired police sergeant Clayton Moore addressed a question people often ask themselves in times of trial. The Jan. 17 presentation in Yoder Recital Hall focused on Moore’s experiences as the first black police officer in Fostoria, Ohio, and his fight against racial discrimination within the department.

Moore shared his experiences and victories with Bluffton faculty, staff and students, which he also recounted in his memoir “Good Cop, Black Cop: Guilty Until Proven Innocent.”

“I would hope that whatever they go through in life, they go through it with their head up,” said Moore of what he hopes students take away from the presentation. “Remember, you owe it to someone else to do it [fight injustice] the right way because you never know who is watching, and they may need it more than you.”

Encouraged by his mother, Moore took the police examination and was hired in 1986. In 2008, Moore was fired after the City of Fostoria claimed 16 conduct violations against him. He challenged the decision and the arbiter of the case reinstated Moore and wrote a scathing rebuke of the city. Moore retired in 2018 after serving for another decade.

During the seven months between his firing and reinstatement, Moore lived through one of the “roughest times of my life.” His firing was all over the news, and it was difficult for him to leave home.

However, “my church and my family were my crutches. I couldn’t walk without them,” explained Moore, who credited three influences for getting him through the difficult time.

Moses—who also asked, “Why Me?” but ultimately led his people to the Promised Land.

Muhammed Ali—who refused the draft and subsequently was stripped of his titles and ability to fight.

Martin Luther King Jr.—who achieved so much in his short time.

“I realized everything I was going through was miniscule compared to them,” Moore shared.

Moore also detailed three instances where people in his community shared their support at the exact time he was in need.

A stranger rolled down his window to say, “we got your back,” as Moore sat in his car.

A fellow church member called to sing for him as he was cooped up in his house.

Moore’s church fundraised for him to help pay for his legal costs.

“After the third time, I had so much peace. I knew I’d be alright,” said Moore. “It took me three instances to learn it wasn’t about me. God was using me as a vessel.

Moore says speaking to groups and writing his book gave him closure. Now, he urges others to embrace the moment when they ask God “Out of everyone, why me?”

Forum and Friday Colloquium presentations, gatherings for interdisciplinary conversation, are open to the public.