Ready to build a life 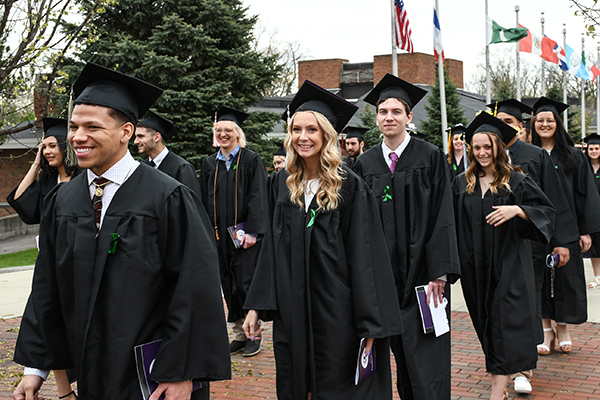 The achievements of Bluffton University’s class of 2022 were celebrated Saturday, May 7, 2022, during Commencement at Sommer Center.

After the processional, President Jane Wood welcomed the graduates, as well as their family and friends.

“We celebrate the quest for knowledge and wisdom that has led each graduate to fulfill the requirements of their major and transform during their four years here,” said President Wood.  “According to our mission, we believe that Bluffton graduates are prepared for life as well as vocation, for responsible citizenship, and for service to all peoples and, ultimately, for the purposes of God’s universal kingdom.”

During his speech, “Greetings,” Strange focused on why today’s college graduates are so desperately needed.

“We need your new eyes on our old problems. We’ve come to realize every problem that could have been solved by a good speech from an old white man has almost probably been solved by now,” said Strange. It’s time to move from speeches to action. Your energy, your insight and your ideas will help us take action against the challenges of our businesses, our communities and our world.”

Strange concluded his remarks with thoughts apt to someone who has been in the construction business his entire working life.

New this year, each graduate received a special lapel pin after receiving their diploma. The lapel pin signifies each graduate’s entry into the Bluffton Network of Alumni and Friends.

“We are delighted to welcome our graduates into this flourishing community,” said President Wood.

Graduates included a student whose great-great-grandfather graduated from Bluffton in 1908 as well as Bluffton’s first class of Bachelor of Science in Nursing students who completed all four years as Beavers. There were also seven graduates from the Village of Bluffton, 10 graduates from states as far east as Maryland and west as Oregon, and graduates from eight countries including Albania, Botswana, Ethiopia, Guatemala, Honduras, Japan, Peru and Syria.