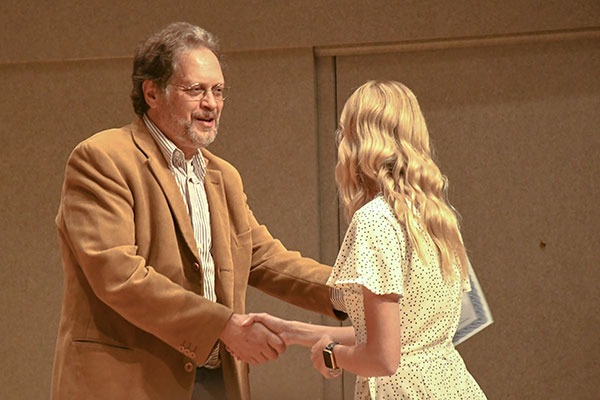 Bluffton University recognized many of its top students for their academic achievements at the annual Academic Awards and Honors Forum on April 26.

Twenty-nine seniors were honored as distinguished scholars in their respective academic areas.

Receiving departmental honors for their independent-study projects were two seniors. Grace Branson of Carlisle, Ohio, for her history project “The Impact of Total War on Bluffton College” and Avery Carter of Bryan, Ohio, for her nutrition and dietetics projects “The Relationships Between Immunoglobulin A Deficiency and Inflammatory Bowel Disease.”

Other awards went to:

Concluding the program was the recognition of three graduating members of Psi Chi National Psychology Honor Society; 36 new members of Bluffton’s Pi Delta Society, an honor for seniors with a grade point average of at least 3.75 during their college careers; and 35 C. Henry Smith Scholars — 11 graduating, 10 continuing and 14 newly elected scholars.