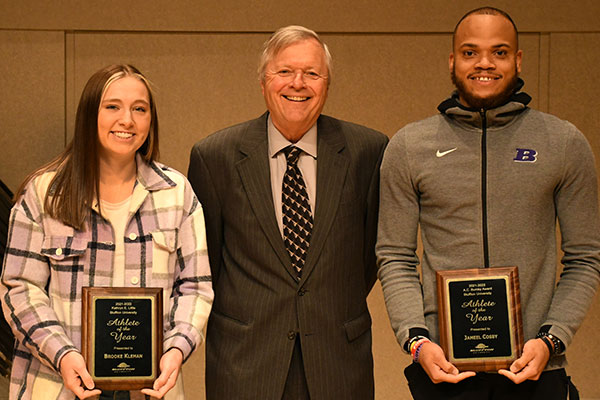 Coach Dan Hughes describes his time as a student-athlete at Muskingum University as a “very non-descript, average college career.” However, his time at the small, private, liberal arts college in Ohio prepared him for the “life after.”

“It’s not what I did in those four years of college, it was the way those people empowered me to enter life and navigate the world,” said Hughes, who recently retired after a 20-plus-year career coaching in the WNBA. “I’m thankful for so many people who challenged me to step into the next stage of life and have my equipment ready.”

For Hughes, life after college included a WNBA championship with the Seattle Storm, multiple coach of the year titles and a gold medal from the Tokyo Olympics as an assistant coach for USA Basketball Women’s National Team. He shared thoughts on “Empowerment” with Bluffton University student-athletes during the April 19 Athletics Awards Forum on campus.

When Hughes thinks back on his biggest career accomplishment, it wasn’t being named coach of the year or winning titles and trophies. Instead, fulfillment came through empowering others. Seven of the 12 current head coaches in the WNBA are part of what Hughes calls his “coaching tree”—six served as an assistant coach for him, and the seventh played for Hughes for eight years.

“The thing that I’m the proudest of is empowering others to become what they desire to be,” said Hughes. “It’s allowed me to live on in a very real way.”

In a nod to one of Bluffton’s longstanding phrases, “it’s all about relationships,” Hughes explained the way he’s developed leaders is through developing relationships.

“You have to genuinely enjoy seeing others have success,” said Hughes. “The greatest form of leadership is developing leaders.”

He also quoted 1 John, “My children, let’s not love in words but in deeds and truths,” as a way to contemplate the weight of actions and words.

Using ideas and examples from a range of historical figures, from Ghandi to Dr. Seuss, Hughes also sprinkled in lessons from fellow coaches such as Greg Popovich.

Hughes described a piece of art hanging in the office of the long-time coach of the San Antonio Spurs.

During the event, Bluffton presented its top athletics awards to standout athletes in basketball and volleyball/swimming.

Cosby is a 4-year starter on the men’s basketball team and improved both on and off the court each year. He earned the starting point guard position as a freshman, was named Heartland Collegiate Athletic Conference (HCAC) Player of the Week multiple times and became Bluffton’s 17th 1,000-point scorer. Cosby ended his career with 1,218 points and was named First Team All-HCAC in his last two years on the court.

A 4-year letter winner in volleyball, she was named to the HCAC Honorable Mention for four years and was on the 2018 All-Freshman Team. A staple on the court, Kleman led the HCAC in digs with 215 in 2021 and is on Bluffton’s all-time leader board for accomplishments such as digs in a career and service aces in a career. As a senior, she also became an inaugural member of Bluffton’s swim team and now holds eleven school swim records in a variety of races.

She is a speech-language pathology and audiology major with a special education minor and is a three-time Academic All-HCAC honoree.

Kleman’s award is named for Kathryn Little, who served in Bluffton’s health, physical education and recreation department and in athletics from 1958-74. Little was a member of the first class inducted into the Bluffton Athletics Hall of Fame.