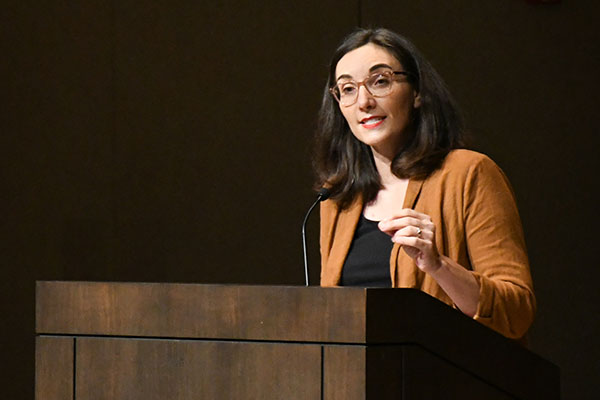 During Melissa Florer-Bixler’s Keeney Peace Lecture at Bluffton University, the pastor and author addressed what she described as some of the most pressing concerns for society today: third way politics, cancel culture and polarization.

“The lecture was a conversation about how our current models of conflict and sorting are failing to create the kind of communities and movements we want and what we can do to pull ourselves out of those habits,” said Florer-Bixler. “These are the things I keep hearing people bring up, so I felt it was important in this space to grapple with those issues.”

Upending the common narratives around the main points of her discussion, Florer-Bixler urged the audience to instead follow the true actions of Jesus, who was a very polarizing figure in his day. And the way he polarized, explained Florer-Bixler, was unexpected. Jesus, instead, introduced conflict and division everywhere he went.

“Some questions we can all ask ourselves are: what is the world I want to live in and is this helping to build that world?” said Florer-Bixler. “Those questions are a helpful way to organize our social media interactions, think about our relationships with one another and organize to be activists in our communities.”

Aimed at college students, Florer-Bixler said the speech focused on consequences of the decisions made in the world today because they will most directly be felt by college-aged students and younger.

“There’s a lot of opportunity for young adults, who I think are kind of tired. They’re tired of division, they’re tired of anger, but they also want the world to be right,” said Florer-Bixler. “They don’t want a world where we just pretend everything is fine. They actually want a better world for themselves and for other people.”

Florer-Bixler is pastor of Raleigh Mennonite Church and has authored two books, “Fire By Night: Finding God in the Pages of the Old Testament” and “How to Have an Enemy: Righteous Anger and the Work of Peace.” She previously spent time at Bluffton University as the Spiritual Life Week speaker in 2018.

Bluffton’s Keeney Peace Lectureship was established in 1978 by the family of William Sr. and Kathryn Keeney to express appreciation for Bluffton’s influence and to strengthen the continuing peace witness among the community.