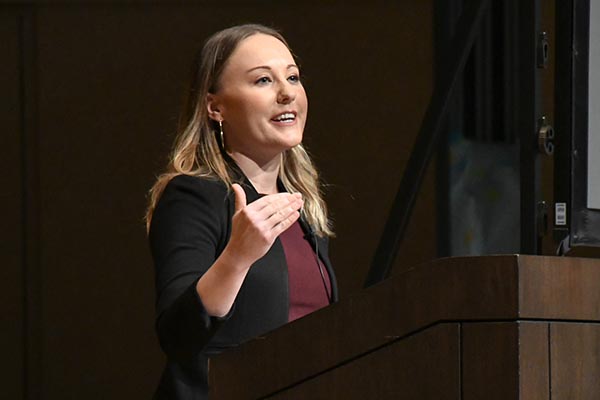 State representative shared the importance of relationships and values

“The investments people make in you and the investments you make in other people transcend a lifetime,” said Susan Manchester. The State Representative for Ohio’s 84th House District (Mercer County and portions of Auglaize, Darke and Shelby counties) shared these words as well as thoughts on relationships and values during Bluffton University’s Presidential Leadership Forum, Jan. 25 in Yoder Recital Hall.

During the presentation for students, faculty and staff, Manchester shared about her first day as a freshman state representative in 2019.

“I was energized. I thought I was going to change the world,” said Manchester. “I think it’s good to have that kind of energy going into any new job, but I was a little naïve to be honest.”

Manchester’s first day coincided with a competitive race for Speaker of the House, the legislator who ultimately decides which bills the chamber will vote on and the committees the lawmakers will sit on. Knowing Householder had previously been ousted from his first term as speaker because of an FBI investigation into corrupt behavior, Manchester didn’t think his “brand of leadership was right for the State of Ohio.”

Manchester chose not to vote for Householder and later was openly opposed to House Bill 6, Householder’s signature piece of legislation, which was essentially a bailout of Ohio’s nuclear power plants.

Instead, Manchester spoke of doing her best to restore a relationship with him because the reality of the workforce is that it is likely the students in the room may have a boss in the future they do not completely agree with and whose values don’t completely align with their own.

A year later, Householder faced corruption charges for colluding with the nuclear power industry and is no longer a member of Ohio’s House of Representatives.

“I tell you this because you are probably going to be tested in whatever position you hold, whatever industry you work in,” said Manchester. “Standing on your principles is ultimately what is going to carry you in the future. Things can change on a dime.”

Manchester ended her presentation by encouraging students to reflect on their roles both on campus and in the democratic process and how those positions intertwine with larger systems.

“Your role is much more significant than you think.”

The Bluffton University Presidential Leadership Lecture Series brings to campus a leader from business, industry, service or nonprofit organizations. The goals of the lecture series is to create a forum for considering leadership values and cooperative efforts for shaping our world by hearing first-hand stories of leadership.