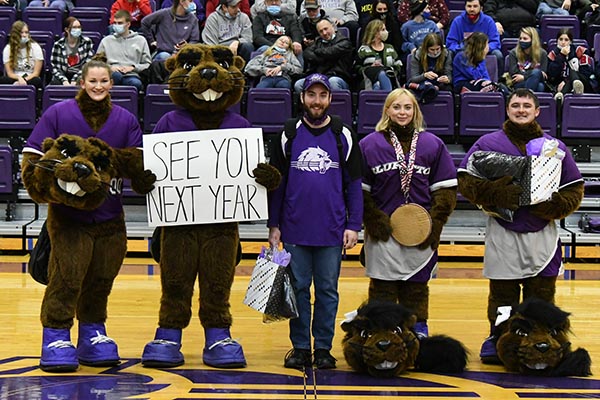 Donning in the suit for 2021-22: Kelly Armentrout, Adam Shanaman, Rona Stafa and Evan Burden, and a Beaver to be named at a later date.

Students in the suits: mascots revealed

Perhaps one of the most tightly guarded secrets at Bluffton University is the identities of J. Denny and Jenny Beaver. Even the closest of friends, roommates and family members of the students who portray Bluffton’s mascots may have no idea who is actually in the suit. However, another generation of Beavers concluded their mascot mission. The identities of the Beavers were revealed between the Jan. 22, 2022, women’s and men’s home basketball games in Sommer Center. 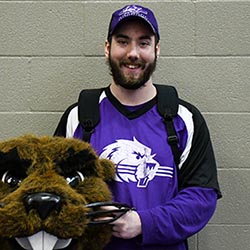 A performer at heart, students have suspected Adam Shanaman ’22 of being a Beaver mascot since his first year on campus. So, in his senior year, he decided to suit up and make their suspicions a reality.

“The best part of being a beaver is adopting a persona that has a rich history and sharing that experience with peers and classmates,” said Shanaman, a Bible and theology major from Bellevue, Ohio. “Getting into a character and making it uniquely my own was a great experience!”

Memorable appearances in the Beaver suit include Finals Breakfast, a campus blood drive and a Discovery Days event with the Bluffton Area Chamber of Commerce.

In addition to serving as J. Denny Beaver, Shanaman is a member of concert and pep bands, a pastoral assistant, a Kit Guide for orientation and the former president of PEACE Club. He has also acted in many plays and musical on campus.

“I greatly enjoyed this experience and am so glad to have shared it with the rest of the beaver performers in our little ‘family.’ Continuing the legacy of the beavers was a great honor!” said Shanaman. 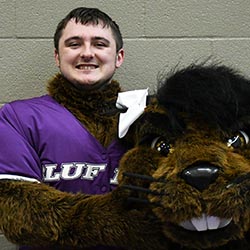 Evan Burden ’22, a music education major from Sidney, Ohio, had to hide his Beaver identity from not only his friends but also his sister who is a fellow Bluffton student.

“Being someone who is seen a lot on campus, trying to make up excuses for why I wasn’t going to big events was hard!” said Burden. “It helped that I was student teaching, so I had some wiggle room for excuses.”

Burden served as both J. Denny and Jenny Beaver and enjoyed participating in Homecoming, Faculty Follies and Bluffton’s Blaze of Lights Parade. He is a member of University Chorale, Camerata Singers, Concert Band, International Connection, Brave Space and OCMEA. Burden also serves as a Presidents Ambassador and Hall Director in Ropp Hall.

He describes the opportunity as once in a lifetime.

“Being a beaver is so much fun! It’s awesome to see the little kids run up to hug or play with the beavers whenever they see us,” said Burden. “It’s also fun messing with people you know when they don’t know it’s you!” 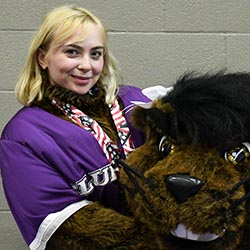 International student Veronika Stafa ’22, a biology and premed major from Laç, Albania, applied because mascots aren’t really a thing in her home country.

“It was a neat experience to not only have mascots at my university but to also be one,” said Stafa, who performed as Jenny Beaver.

Some of her favorite appearances in the suit include Homecoming, Family Weekend’s Oktoberfest and Mascot Olympics in Findlay. During Mascot Olympics, Stafa won a gold medal dressed as Jenny by competing in a series of events including musical chairs.

A commuter student, Stafa had an easier time than some of her fellow Beavers maintaining her secret identity, but the distinct way she initially waved her hand had many friends become suspicious.

On campus, she sings in Chapel and is a member of Student Senate and International Connection. Stafa works in Bluffton’s Tech Center and as a library assistant in Musselman Library. 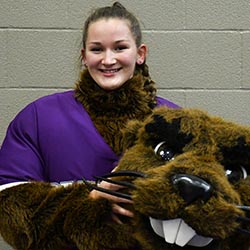 For Kelly Armentrout ’24, an exercise science major from Lima, Ohio, being a mascot runs in the family.

“My grandpa was a mascot for the Lima Locos baseball team, and my dad and I both won most school spirit our senior years of high school,” said Armentrout. “It kind of felt like a calling to me to do something that is a part of my family's history.”

Armentrout suited up as J. Denny Beaver at events including the Mascot Olympics in Findlay (where she earned the bronze medal), Bluffton’s Blaze of Lights Parade and Christmas at the Houshower House.

She described the experience as cool, unique and rewarding.

“We are one of the first things students see when they come on campus for orientation and one of the last things they see at graduation,” explained Armentrout. “Many people wear the Beaver logo as alumni long after they graduate.”

Outside of being a Beaver mascot, Armentrout is a member of the volleyball team and serves on Marbeck Center Board and the spirit squad committee. She works in Bluffton’s mailroom and as an intramural coordinator.

Two additional students served as Beavers during the 2021-22 year but have chosen to continue their mascot duties and were not revealed. In the past 12 years, just 45 students have been selected to fill the roles of J. Denny and Jenny Beaver.

Students who would like to audition to be 2022-23 J. Denny and Jenny performers are encouraged to apply by Jan. 30 at www.bluffton.edu/jdenny

Want to get into the suit?

Applications for 2022-23 J Denny and Jenny are accepted through Sunday, Jan. 30.