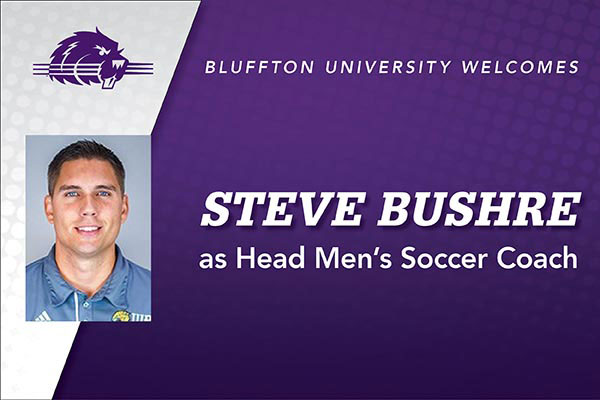 Bluffton University has named Steve Bushre as its next head men’s soccer coach.

Bushre coached at the collegiate level since 2015. He most recently served as an assistant coach at Indiana University East in Richmond, Ind., where Bushre was responsible for building a large recruiting class for the 2022 season. He also has experience coaching in the Heartland Collegiate Athletic Conference (HCAC), in which Bluffton competes, as a recruiting coordinator/assistant coach for Anderson University. Bushre began his college coaching career as an assistant at Taylor University where he created a junior varsity program.

Bushre will start head coaching duties at Bluffton on Feb. 1.

“I am excited and humbled by the opportunity to lead the Bluffton University men’s soccer program. The team is coming off a historic year and Coach Richardson has laid a foundation that we will continue to build upon,” said Bushre. “I would like to thank Phill Talavinia, James Grandey, and the entire search committee at Bluffton University for their trust and for this opportunity to lead a great group of young men.”

In addition to his collegiate coaching experience, Bushre is the founder and head coach for Old Bhoys Soccer Club, an adult-amateur club competing in national and regional leagues. The club reached the USASA Regional Semifinals in its first two years. He’s also served as a youth development coach at USAi, Indy Premier SC and Hoosier FC since 2012.

Bushre earned a bachelor’s degree in business administration management from Cedarville University in 2008 and a master’s degree in recreation and sport sciences in 2019 from Ohio University.

He takes over for Robert Richardson who served as head coach for two seasons and led the men’s team to an HCAC conference appearance this past season.