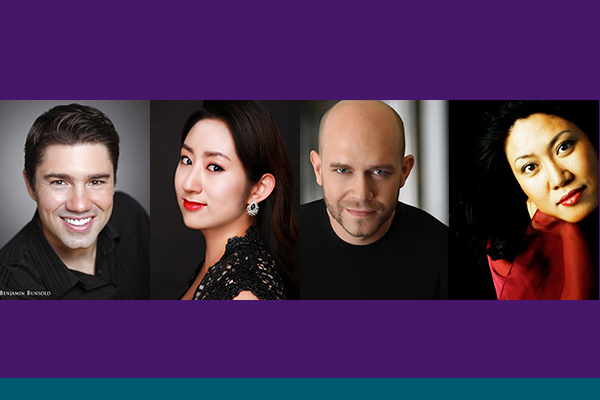 Lee recently earned her doctoral degree at the University of Texas at Austin as the recipient of the Willa Stewart Setseck Scholarship. She also holds a Master of Music from University of Texas at Austin and a Bachelor of Music in Vocal Performance with a minor in Arts Administration from Korea National University of the Arts, from which she graduated summa cum laude. Dr. Lee has performed various leading roles, including Susanna (Le nozze di Figaro), Adina (L'elisir D'amor), Gretel (Hansel and Gretel), Constance (Dialogues des Carmélites), Despina (Così fan tutte), Papagena (Die Zauberflöte) and Rosina (Il Barbiere di Siviglia). She won a silver medal in the Young Texas Artists Music Competition and has received further prize awards from the New Jersey Sinfonietta International Vocal Competition, the Houston Saengerbund Competition and the Mid-Texas Symphony Young Artist Competition. Upcoming performances include the role of Adele (Die Fledermaus) with New York Performing Arts Theatre.

Kim has performed major roles in operas and concert works throughout the world with many prestigious opera companies and orchestras including Santa Fe Opera, Baltimore Opera, Cleveland Opera, El Paso Opera, Virginia Opera, Ash Lawn Opera Festival, Opera Orchestra of New York, Caramoor Music Festival, National Chorale, Korean Symphony Orchestra, Seoul Philharmonic Orchestra, Sapporo Symphony Orchestra and Staatskapelle Halle in Germany. Kim has been featured in the title role as Queen Lili'uokalani in Little Opera Theater of NY’s Better Gods, as featured artist in Korea Now concert in Cairo, Egypt and in The Shakespeare Concert at Jordan Hall and Jewett Arts Center, and as Alto Solo in Prokofiev’s Alexander Nevsky with Dayton Philharmonic Orchestra. Kim earned her D.M.A. in Voice from State University of New York in Stony Brook and received her Artist’s Diploma in Opera from the Academy of Vocal Arts. She also received both a Master of Music and a Bachelor of Music in Voice from Manhattan School of Music. She has been on the voice faculty at the University of Dayton since 2013.

Bunsold has sung in a wide variety of operatic and concert engagements. Notable performances include Roméo (Roméo et Juliette) for Center Stage Opera in California, Fenton (Falstaff) with Opera Idaho and Forth Worth Opera, Alfredo (La Traviata) with Asheville Lyric Opera, Ferrando (Cosi fan tutte) with Shreveport Opera and Alfred (Die Fledermaus) with St. Petersburg Opera. Bunsold has also performed in a variety of settings as an active concert soloist, including the Tucson Symphony Orchestra, Sinfonia da Camera in Illinois, the Kalamazoo Orchestra and the Indianapolis Chamber Orchestra. He’s been tenor soloist in Carmina Burana with the Southern Arizona Symphony Orchestra, Mozart’s Requiem at Virginia Tech University and has performed numerous recitals such as Schubert's Die schöne Müllerin and Britten's Serenade Op. 31 for Tenor, Horn and Strings. Recent concerts include tenor soloist in Saint-Saëns' Christmas Oratorio with ProMusica Chamber Orchestra, Beethoven Mass in C with the Knox County Symphony, Mozart’s Requiem for the Fairbanks Symphony in Alaska, guest artist with the Central Ohio Symphony Orchestra and at Heidelberg University’s Christmas Concert.

Kerr is known for his stage savvy and has been heard as Germont with the Philharmonia Orchestra of New York at Lincoln Center; and sang the King in Aida with Opera Columbus. He sang solo engagements with the Hudson Valley Philharmonic, the Ohio Song Project and Denison University, and participated in Opera Columbus's world première of The Flood by Korine Fujiwara directed by Stephen Wadsworth, was a soloist in Mozart's Requiem with Philharmonia Orchestra of New York and was the title role of Rigoletto with Opera Projects Columbus. This season he was the title role in Gianni Schicchi with Opera Columbus. Other engagements included his appearance at the Kennedy Center Honors along with Sondra Radvanovsky and Joseph Calleja in an Aida tribute to honoree, Martina Arroyo. Kerr holds a Bachelor of Fine Arts in Musical Theater from Ohio Northern University and a Master of Music in Voice Performance from The Ohio State University. He was a National Semi-Finalist in The Metropolitan Opera National Council Auditions in 2008.

Dr. Bo Young Kang, director of choral activities, will be conducting the oratorio at Bluffton. While tickets are free, they must be reserved at https://tickets.bluffton.edu or at Marbeck Center.

The event will also be streamed live at http://www.bluffton.edu/messiah