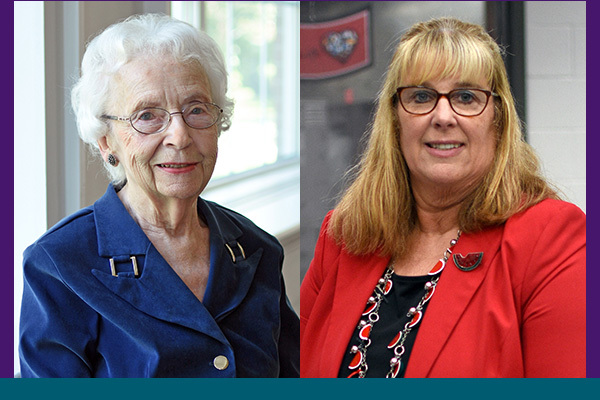 Exceptional Bluffton University alumni and faculty are honored each year during Homecoming at the President’s Banquet. During the event, alumni and faculty who have reached milestones of achievement, service and giving are recognized.

Woodruff earned her Bachelor of Arts in 1985 as a food and nutrition major and Master of Arts in Organizational Management in 2002. For the past 20 years, she has served as the food service director of the Lima City Schools in Lima, Ohio. During that time, she has overseen the implementation of free breakfast and lunch programs, earned multiple grants for fresh fruits and vegetables in the schools, and led the redesign of the nine school cafeterias in the district. Woodruff routinely speaks on food and nutrition issues across the country, including in Washington, D.C., at U.S. House and Senate briefings. She has earned multiple awards for her efforts to provide nutritious meals to young people, most recently the Food Achievement and Management Excellence (FAME) Silver Award. Woodruff is committed to advancing the profession and has mentored more than 50 post-baccalaureate dietetics students, including many from Bluffton.

Szabo served as a faculty member in the music department for 27 years, from 1965 through 1992. A 1949 graduate of Baldwin Wallace University, she taught private piano lessons at home for several years prior to joining the Bluffton music faculty. In 1970, she completed a Master of Music from Bowling Green State University and received tenure in 1974. She completed a sabbatical at the Vienna Conservatory of Music in Vienna, Austria, the same year. Szabo continued her sabbatical studies at Kingston Polytechnic in London, England, in 1981 and through visits at selected universities in Canada and the United States during the winter of 1988-89. During her tenure, she served on several committees and professional organizations, accompanied countless recitals and “Messiah” performances, and served as the chair of the Artist Series Committee for 10 years while remaining a committed teacher and mentor to her students. An active member of First United Methodist Church, she played the organ during church services for 60 years.

This year’s event will begin with a 5:30 p.m. reception in Bassett Plaza outside the lower level of Marbeck Center on Saturday, Oct. 12, followed by the banquet at 6 p.m. in The Commons of Marbeck Center. Tickets for the banquet are $25 and may be reserved by contacting Claire Clay at clayc@bluffton.edu or 419-358-3456 before Sept. 27.

Alumni Awards will be presented at the President's Banquet on Saturday, Oct. 12. Tickets for the banquet are $25 and may be reserved by contacting Claire Clay before Sept. 27.