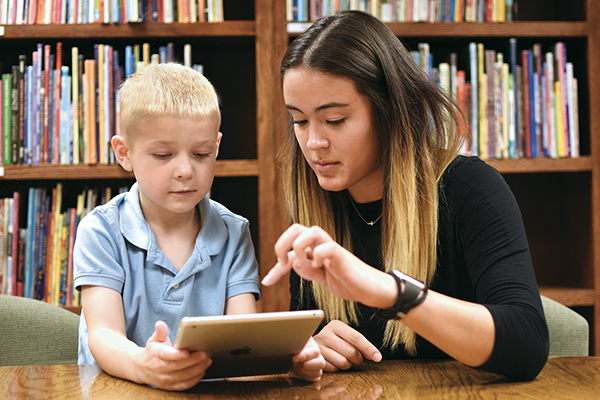 The SLPA program was added as a Bluffton major in the fall of 2016.

Originally planning to pursue a career as a sign language interpreter, Alexis Montemarano ’20 was intrigued by Bluffton University’s newly developed speech-language pathology and audiology program as a first-year student. Now, Montemarano is a member of Bluffton’s first class of SLPA graduates. This fall, she will pursue a Master of Science in Speech Language Pathology at Baldwin Wallace University, serve as a graduate assistant and work on research and funding for special education programs.

“When I learned about the SLPA major, I thought it was a better fit because I could help people with communication disorders,” said Montemarano. “My ultimate goal is to be a pediatric speech pathologist.

The SLPA program was added to Bluffton’s lineup in the fall of 2016 because of the growing need for professionals in and its close alignment with Bluffton’s mission. According to the Bureau of Labor statistics, the job outlook for speech language pathologists is expected to grow by 27 percent from 2018-28 and 16 percent over the same time period for audiologists. In both professions, the growth rate is much faster than the overall average.

“I tell my students that they will be successful if they have the heart of a servant,” explained Trevor Scott, program director and assistant professor. “Successful students in SLPA often have a connection to the field. Maybe they had a speech disorder as a child or had a sibling with autism spectrum disorder. Usually, a seed has been planted somewhere along the way that gives the student a desire to care for other people.”

This is true for many members of the class of 2020. Montemarano learned sign language at a young age to communicate with a deaf friend, while Madison Ament overcame her own language impairment.

“I saw a therapist for the first 10 years of my life,” explained Ament, a December 2020 graduate who plans to pursue audiology. “When thinking of what I could possibly major in, I decided to give SLPA a try. I wanted to go into a field that gives back to the community.”

“As the primary instructor and advisor for all of the SLPA majors, I really get to know the students. I can spot when they are struggling, and I can track their strengths and weaknesses across domains,” said Scott. “The graduate school application process is extremely competitive in our field, and we had a 100 percent graduate school acceptance rate.”

“I was assigned to be a mentor to an incoming freshman and through that, I made an amazing friendship,” explained Cassie Reinhart ’20, who will be serving as a graduate assistant while pursuing a Master of Arts in Speech Language Pathology at the University of Toledo in the fall. “The first year can be challenging and this program taught me how important is it to have a mentor and that it’s okay to ask for help.”

“We were pushed to a high standard to prepare us for the rigorous curriculum of graduate school,” said Montemarano. “I feel prepared for the next step.”

Speech language pathologists work with people of all ages who have disorders in speech, language, social communication, cognitive communication and swallowing.