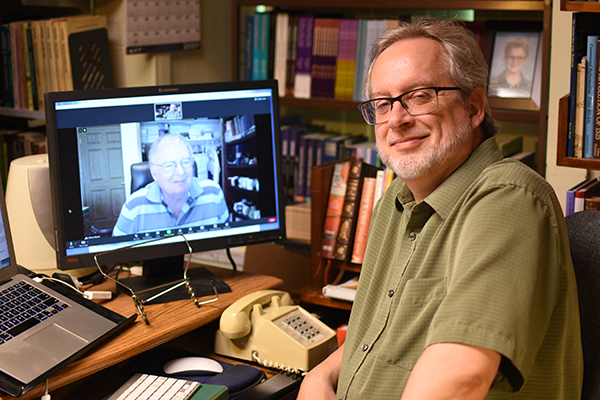 Friendship and debate fuel 25 years of scholarly research for Professors

For a quarter century, Bluffton University professors J. Denny Weaver and Gerald Mast have been writing, researching and collaborating on projects exploring the Anabaptist peace church tradition. As Mast recalls, the partnership was established when he came to campus for the interview process in the spring of 1995. During an informal reception after the interview, Weaver handed him an essay and requested feedback. Surprised, Mast took the essay, read it and started corresponding with Weaver.

“That in many ways was the beginning of our working relationship. Even before I had the job in hand, he was interested in conversation. That’s how we work together,” explained Mast, professor of communication. “We show each other what we have been writing, and we respond to each other’s work. It leads to all kinds of conversation and eventually joint projects.”

The two had previously met when Mast, a graduate school student at the time, invited Weaver to share a sermon at Pittsburgh Mennonite Church. Over the years, the pair have collaborated on four books and four published essays, as well as numerous conference panels and programs. For several years, their offices were separated only by one floor. Besides the proximity of space and their shared passion for dialogue, Weaver believes their working relationship has been powered by a common agenda.

“We see the Anabaptist tradition as a distinct tradition that has the potential to shape the way the contemporary church lives in the world,” said Weaver, emeritus professor of religion. “One of the most important dimensions of our collaboration is that we came to this common agenda from different disciplines. This means our conversations and collaborations have been mutually enriching.”

Although Weaver researched the theology of the Reformation in graduate school, his academic emphasis deals with how modern Anabaptists understand the standard questions of theology. Mast’s professional focus is rhetoric—in particular, the writings of 16th century religious leaders.

“We are both interested in 16th century and modern theology, but I’m often the person in our relationship who asks, ‘What happened in history?’ while he thinks about issues in terms of how they deal with post-modern theology,” said Mast.

This way of working through questions of theology and applying them to life often draws other friends and colleagues into the conversation, as is evident in their most recent book project, “Nonviolent Word: Anabaptism, the Bible, and the Grain of the Universe.” The book was completed in 2019 following conference presentations at Baylor University, Goshen College and Bluffton University in honor of the 500th anniversary of the Reformation. Jackie Wyse-Rhodes, assistant professor of religion, also presented at the conferences with Mast and Weaver. Artwork by Philip Sugden, assistant professor of art, appears on the cover of the book.

Divided into two parts (Early Anabaptists and the Nonviolent Word of God/ Anabaptists and the Contemporary Believers Church), Mast wrote two chapters, along with the introduction and conclusion, while Weaver provided the remaining four chapters. The book connects challenging issues society is addressing today with ideas that came out of the Reformation.

“The chapters on 16th century subjects show the beginning of a distinct Anabaptist approach to theology, and the chapters in the contemporary part present modern applications,” explained Weaver. “It is virtually providential that two of these contemporary chapters deal with the necessity of white churches to listen to black churches, and a biblical and theological basis for nonviolent activism.”

The pair is actively working on another book project that started with a 2009 conference on early Anabaptist leader Pilgrim Marpeck, organized by Mast and other colleagues on Bluffton’s campus. Weaver, retired from teaching since 2006 and currently living in Madison, Wis., is editing papers from that conference into a book. Mast and Trevor Bechtel, who previously taught at Bluffton, also serve as co-editors

Over the years, both personally and professionally, Mast says the conversations he’s had with Weaver have expanded the way he thinks about the world.

“Often people experience argumentation as anxiety producing. Denny and I don’t see it that way,” explained Mast. “We are able to explore new ideas through both agreement and disagreement. It’s why we click.”

Weaver added, “The discussion here focuses primarily on publications and mutual learning. But our collaboration is more—a mutual respect that covers many aspects of our life and work.” 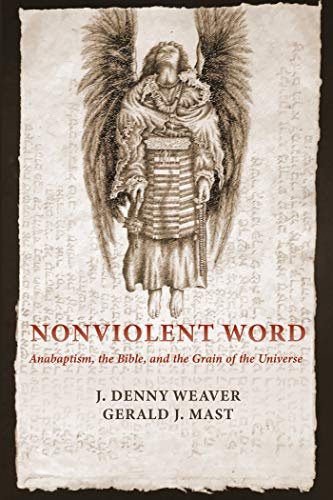 “...the book invites a reading of Scripture centered in Jesus’ life and teachings as told by the narratives of the New Testament. This approach to the Bible discovers there a persuasive witness to the power of nonviolent action in both historic movements and contemporary settings.”