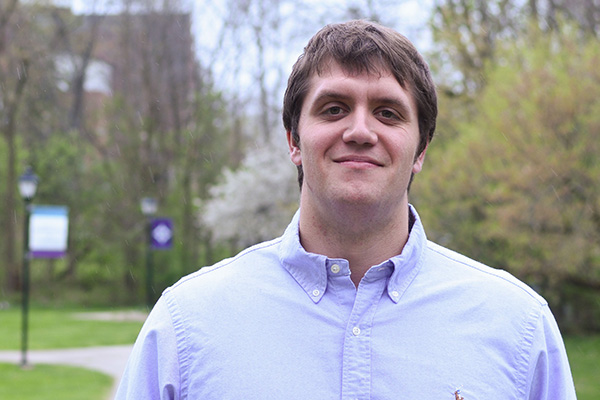 Gabe Denecker will compete against winning students from other North American Mennonite colleges during the bi-national competition.

Denecker’s speech, “The Catholic View of Peace: Just War and the Brotherhood of Humanity,” explored Catholic Just War Theory, beginning with Augustine and ending with the Just War Theory as applied to the American war in Afghanistan. The goal of his speech was to demonstrate how Catholic social teaching shares more in common with the peace church theology of the Mennonites than one might initially think.

He earned $175 and will compete against winning students from other North American Mennonite colleges during the bi-national competition.

Claire Myree ’21, an English and communication double major from West Chester, Ohio, came in second with the speech, “Can Friendship Trump All? Friendship in the Trump Era.”

Olivia Tennefoss ’21, a convergent media major from Greenwood, Del., came in third with the speech, “America the Beautfiful: At the Border and in our Communities.”

This contest is administered by the communication and theatre department at Bluffton University. Dr. Gerald Mast, professor of communication, has taken the lead for 24 years.