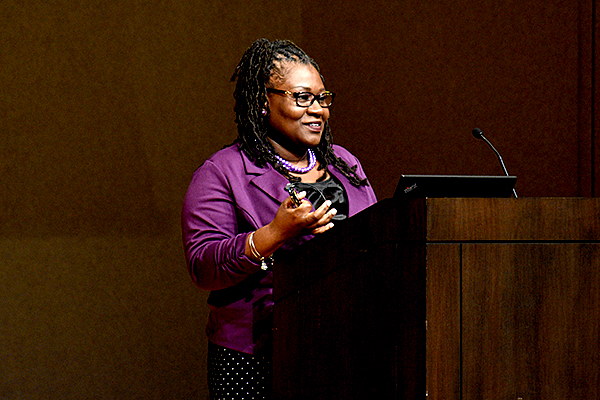 During Bluffton University’s annual Martin Luther King Jr. Forum, Dr. LaShonda Gurley issued a challenge: “Be the seeds, shift the culture, walk the talk.” Gurley, director of the Center for Career and Vocation at Bluffton University, provided practical ideas for dealing with bias and leveraging privilege in everyday life during the Jan. 21 presentation, “Walking the Talk: Transforming the Dream into Reality.”

Gurley broke down the well-known speech, which began as a written reflection, but changed in an instant when singer Mahalia Jackson shouted to King to talk about his dream. In that moment, the dynamics of the speech changed as King ad-libbed on progression rather than reflection. Gurley believes in that transition, King planted the seeds of a changed society that he hoped would come to fruition.

To grow those seeds, Gurley explained the key question to ask of oneself is: “What can I do each and every day to walk out Dr. King’s dream?”

Speaking to students, Gurley acknowledge that societal problems can seem overwhelming and insurmountable, but insisted, individuals can make an impact.

“Collective voices make sounds. If you have one person who makes a difference that changes policy or culture, think about what happens if you have 10 people who do it,” said Gurley. “If 10 people make the conscious decision to do something different to bring inclusion into their space, before you know it, a whole group can invoke change and shift the culture.”

To shift culture, though, Gurley explained bias and privilege must be understood. Bias comes in many forms from conformity bias (group peer pressure) to beauty bias to affinity bias. From a career and vocation standpoint, bias can help people who have specific traits or commonalities get a job or promotion, but it is often at the exclusion of candidates who may bring a completely different set of skills or viewpoints to the position.

So, while they are still in college, Gurley encouraged students to start undermining bias by opening up to new and different people. “Have the courage to walk up to a group of students you don’t normally affiliate with and ask, ‘Mind if I join you?’ Have the courage,” said Gurley. “It can be uncomfortable, but engaging and interacting in spaces with people who are unfamiliar with you widens your spheres of influence on campus.”

Reinforcing practices like this one today, can bring about change when a student transitions to the workforce.

“In the future, you’ll be the voice to stand up and say “How can we create more inclusive spaces or how do we think about lifting up those who are marginalized?” explained Gurley, who reminded the audience that they will likely soon be searching for a job, and eventually, will be in a position where they will be evaluating and hiring.

“So what can you do now? Practice inclusion every day so it becomes part of your character, and when you are in a place of influence it will be a natural occurrence to ask the question ‘Is this equitable?’”

Every Tuesday morning during the academic year, the campus community gathers for interdisplinary conversation and discovery.