Using the theme “Reimagining the Church: Looking Back to Move Forward” as inspiration, Bluffton University students explored the relevance of the Church in the modern era during Spiritual Life Week. The week-long, student-led examination of faith is held each semester on Bluffton’s campus.

For Jenny Dorsey, a Biblical and theological studies major from Hilliard, Ohio, and chair of the Spiritual Life Week Committee, the topic is of vital importance.

Leading the conversation was Hannah Troyer, a 24-year-old community organizer and activist from Akron, Ohio, who is currently engaged in the work of reimagining the Church. Troyer cofounded The Neighborhood in 2017 to address KKK recruiting activities in the Wayne and Holmes County, Ohio, communities, and served with the Innerbelt National Forest to bring diverse groups of people together following the failure of a controversial freeway construction and development project in her home community. During the week, she served as the speaker at Forum, Chapel and Sunday Night Worship and worked closely with members of the campus community.

Acknowledging that the world is hyper-politicized, with tensions and divisions between cultures and races seeming to grow wider every day, Troyer asked “What are we to do as people who still believe and strive to live by the message and teaching of Jesus? Is the Church still the vehicle to proclaim Christ’s love to the world?”

Troyer’s answer: yes, but she also believes the Church needs some reimagining.
“I’m becoming more and more convinced that to be sustainable in doing justice work in the Church, we must learn our roots, which happen to be pretty unjust,” explained Troyer, who shared with students the horrific philosophical and legal framework that the United States of America was founded on through Papal Bulls from Pope Nicholas V and the Doctrine of Discovery.

To grow in relevance for youth, Troyer believes the Church must be a place of healing, community, worship and outreach looking forward.

“I go to church on Sunday, I teach a Sunday school class. I’m on our church council. I’m engaged in the functions of my church conference. I’m not for throwing away what we’ve got now,” explained Troyer. “But I do propose we look at new models and examples. Models that include a community that is less segregated, more open-ended, more flexible, more accessible, that creates real change in our communities. Models that allow the Spirit to move and speak more freely.”

Troyer and the Spiritual Life Week Committee drew from Acts 2:46-47. “Every day they continued to meet together in the temple courts. They broke bread in their homes and ate together with glad and sincere hearts, praising God and enjoying the favor of all the people. And the Lord added to their number daily those who were being saved.”

Other events during the week included a racial reconciliation event co-sponsored by the Multicultural Student Organization, a movie night and a coffee house concert with Bluffton-area musicians. Juggler for Jesus David Cain, a Guinness World Record Holder, who incorporates Bible verses and thoughts on Christianity into his juggling routine, also added a bit of levity to the work of the theme.
At the conclusion of the week, Emily Griffioen, a graphic design major from Belmond, Iowa, said she was inspired to act now, while she is still in college.

“Hannah showed us that you don’t need to feel qualified to do this work, you just need to start and follow through,” said Griffioen. “Spiritual Life Week was both inspiring and challenging and was a good balance between the two, looking at what we can do as the Church and also as people.” 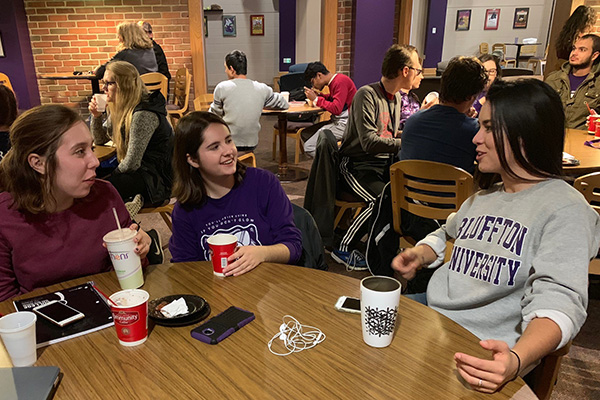 “Hannah showed us that you don’t need to feel qualified to do this work, you just need to start and follow through. Spiritual Life Week was both inspiring and challenging... looking at what we can do as the Church and also as people.”