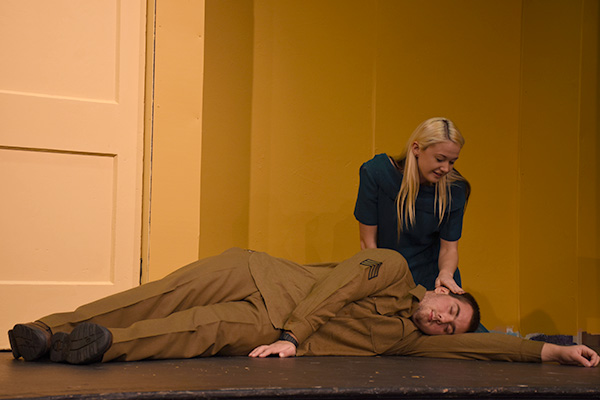 This modern adaptation of the Greek myth about Helen of Troy tackles issues that are as common today as they were in the Iron Age.

Bluffton theatre presents a modern adaptation of a Greek myth

Themes of beauty, truth and the nature of human existence are explored during Bluffton University’s fall play “Helen.” The modern adaptation of the famous Greek myth about Helen of Troy, the most beautiful woman in the world, tackles issues that are as common today as they were in the Iron Age.

“For me, the play really resonates on two different points,” said Brista Drake, a senior art and writing major and theatre minor from Richwood, Ohio, who is playing the title role. “One, who controls our lives? Who gets to tell our own stories? And the second is the aspect of beauty and how beauty can control us. When I’m saying my lines as Helen, I really relate to her.”

The play is an adaptation by Ellen McLaughlin from the work of Euripides. In both plays, Helen of Troy isn’t with Paris in Troy or with her husband Menelaus in Sparta. Instead, a “fake” Helen is causing all of the turmoil and chaos in Troy.

In McLaughlin’s version, Helen is whisked away by the gods to a three-star Egyptian hotel, with modern amenities such as an elevator and a television set, for the duration of the war.

“Helen becomes the most hated woman in the world because all of these deaths are blamed on her, but at the same time, she is idealized as the most beautiful woman in the world,” explains Dr. Melissa Friesen, director and chair of the art, communication and theatre department. “She is living with guilt for things she is not actually doing, and there are all of these parallels to the celebrity culture of our time period and how we layer our own projections onto public figures.”

While the play deals with heavy themes, Friesen says there are plenty of moments that add levity and humor to the difficult topics. With a small cast, Friesen has really enjoyed digging into the material.

“These are some really meaty roles for these five actors. They’re complex. They have long monologues and the language is quite poetic,” said Friesen. “It’s been a delight as a director since there are only one or two characters on the stage at a time. I’ve never had a better experience helping the students explore their characters.”

Just as the story plays with the audience’s assumptions about Helen of Troy, it also plays with time and space. Characters wear costumes from different eras and dialogue includes references from throughout history.

“Anyone who is interested in Greek mythology or poetic language or asking questions that grapple with the nature of human existences would be interested in this play,” said Friesen. “We ask huge questions, but they are dealt with in an entertaining and interesting way.”

For Drake, the play has helped her identify the different roles she plays in society. She’s excited to share the play’s themes with the wider community.

“When you watch ‘Helen,’ you will be captivated and inspired,” said Drake. “You’ll laugh and you’ll think deeper about the concepts of beauty and who’s telling your story.”

“Helen” will be performed Nov. 1-4 in Ramseyer Auditorium. Tickets are available online at tickets.bluffton.edu or at the Marbeck Center information desk.