This summer, Becky Boban ’19, an art and writing major from Madison, Ohio, learned practice really does pay off. Boban was the recipient of a Bluffton University Summer Discovery Grant, which allowed her to attend a writing workshop and devote the majority of her summer break to the written word.

“I’m really glad I took a summer to focus on what I think is important, determine what my passions are and advance in my craft,” said Boban.

The $1,500 grant allows Bluffton students to develop a 4-6 week experience to explore vocational possibilities. Boban used the money to attend the Antioch Writers’ Workshop. The week-long experience brings writers of all ages and skill levels from across the country to Dayton, Ohio, to progress in the art of writing.

“You learn more when you are around other writers,” said Boban. “They emphasized the phrase ‘find your tribe,’ the people who you could feed off of and who understood what you were doing as a writer. It was very positive.”

During the workshop, Boban focused on a fiction track of study, but she also attended sessions that delved into the professional aspects of writing such as how to get a book published or how to write a query letter.

“I wanted to see the bigger picture in the world of writing,” explained Boban. “That was my hope in going, and I think that was satisfied.”

“Authors always emphasize the importance of getting into a routine,” explained Boban. “So I wanted to find what works best for me. I would write in the morning versus the evening, and I would have different amounts of projects going on. I experimented with that for a couple of weeks.”

At first, Boban said she set daily content goals. However, she quickly realized she was spending the entire day at the computer trudging through the work.

“I kind of burnt myself out,” said Boban. “I realized that maybe instead of content I should have a time limit. That felt a lot more productive.”

On top of the Summer Discovery Grant, Boban is taking advantage of the many opportunities Bluffton provides to student writers. She is on the editorial staff of both “Bridge: The Bluffton University Literary Journal” and “Shalith.”

“It helps you be a better critic,” explained Boban of editing the work of others. However, upon graduation, she would like to find a position where she can further her own work “rather than revise some else’s.”

Boban was also awarded a Pi Delta grant that allowed her to attend a summer poetry workshop in Pennsylvania. That’s where she learned about the importance of practice from poet Julia Kasdorf, who urged writers to act like athletes.

“Athletes understand the importance of practice,” explained Boban. “People who focus more on the academic side would think of creating as an act of genius instead of practice. But the act of taking time to write has changed me and helped me grow. It has challenged my perspective of what it means to be a writer. It’s not just being able to write well. It’s being willing to revise and think about your word choice and do the gritty stuff as well.”

Boban has been published in “The Merrimack Review,” “Asterism,” “Periphery” and “Bridge.”

Entering her senior year, she plans to spend a lot of time at the Center for Career and Vocation researching writing professions and revising her resume. 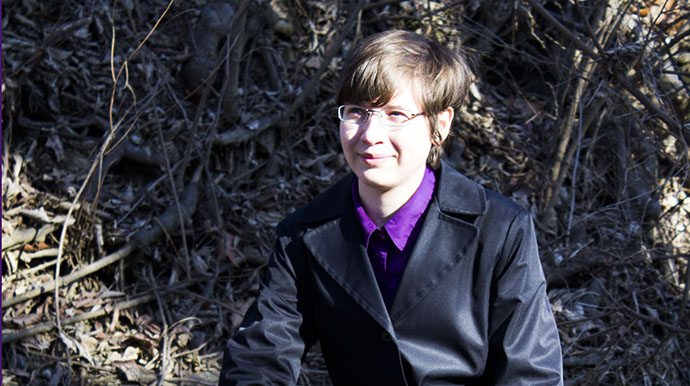 "I wanted to see the bigger picture in the world of writing. That was my hope in going, and I think that was satisfied.”