In an era when many people with opposing viewpoints figuratively retreat to opposite corners of a boxing ring when conflicts arise, author and counselor Jonas Beiler urged first-year students at Bluffton University to instead talk, listen to others and share a meal.

“Be brave enough to have tough conversations,” urged Beiler. “God forgives, and since we are made in the likeness of God we need to forgive as well.”

Beiler, who wrote “Think No Evil: Inside the Story of the Amish Schoolhouse Shooting… and Beyond,” spoke at Opening Convocation on Sept. 28. The book was the 2018 summer reading for first-year Bluffton students and explored the idea of forgiveness being central to the challenging conversations that took place following a 2006 shooting at a one-room schoolhouse in Nickel Mines, Pa. Five Amish girls were killed and another five were injured in the violence committed by Charles Roberts.

“The shooting happened at about 10 a.m. and by 5 p.m. an Amish man was at the Roberts’ house to comfort the parents of the shooter,” explained Beiler as one example of the Amish commitment to forgiveness.

While this act of compassion might be hard for many people outside of the Amish community to understand, Beiler, who grew up in an Old-Order Amish family, explained it is simply the way the Amish face conflict.

“The Amish go toward difficult things in life with the determination to find a peaceful outcome,” said Beiler. “They confront the situation and make friendships out of perceived enemies.”

The summer reading and Convocation presentation started a year-long exploration into Bluffton’s 2018-19 Civic Engagement Theme of “When Talking is Tough: Respectful Conversations in a Divided Nation.” Throughout the year, Bluffton’s students, faculty and staff will draw on the Civic Engagement Theme to learn about and put into practice ways to better listen to each other.

“Even among members of the campus community, potentially controversial topics are often avoided to step away from possible conflict,” explained Dr. Lamar Nisly, interim vice president and dean of academic affairs. “Rather than remain in the safe confines of our groups, we will look at how we can open ourselves up to genuine dialogue.”

With professors wearing academic regalia watching, Nisly read the names of each first-year and transfer student as they were welcomed as full-fledged members of Bluffton’s academic community. The names of an entire student class are read just twice at Bluffton University—during Opening Convocation and during Commencement. Professors of Bluffton’s first-year course, Becoming a Scholar, also presented honor covenants signed by each student.

“This is one way we communicate to students that they each play a role in making Bluffton a community of engaged learners,” said Nisly about the significance of Convocation.

With students just starting the academic year, Beiler left them with some practical advice for exploring the Civic Engagement theme as well succeeding in college and life.

“You may have something to say, but can you listen to others as well?” asked Beiler. “Your response is your own responsibility and you want to be standing at the end with integrity and with your reputation intact.” 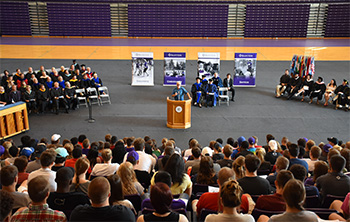 “Be brave enough to have tough conversations. God forgives, and since we are made in the likeness of God we need to forgive as well.”