Xhari’s speech, “Restorative Justice and Sexual Violence,” explored the prevalence of sexual violence in educational and church settings. She addressed the failures of the traditional criminal justice system in providing justice to victims and promoted the use of restorative justice as a means of empowerment.

Xhari earned $175 and will compete against winning students from other North American Mennonite colleges during the bi-national competition.

Joel Jacobson ’18, a convergent media major from Carlisle, Ohio, examined the modern media landscape in the United States and paralleled media literacy with the Christian values of truth and peace to show how media literacy can create a more peaceful and civil society.

Katey Ebaugh ’18, a sociology major from Holtwood, Pa., discussed rural homelessness in Ohio and how it doesn’t correlate to the stereotypical images of people on the streets. She also offered ideas on how the church should prevent and respond to homelessness.

This contest is administered on Bluffton’s campus by the communication and theatre department. Dr. Gerald Mast, professor of communication, has taken the lead for 22 years.

“Peace oratory contests provide our students with the experience of speaking publicly about the challenges to peace in our time,” said Mast. “The contest also encourages both speakers and audience members to think creatively about how we can all be part of the solution to the violence that remains all around us.”

Winners of the peace oratorical contest at Bluffton University have frequently won prizes at the intercollegiate level including the 2015 bi-national winner, Emily Huxman ‘17, from Waterloo, Ontario, and Rebecca Starn ’18, of Findlay, Ohio, who placed third at the bi-national competition in 2016. 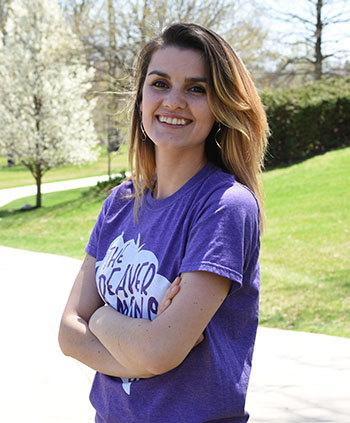