Negotiating the labyrinth to leadership

BLUFFTON, Ohio—“Glass ceiling” may no longer be the best description of what keeps more women from reaching high-level positions in business.

The limitation on leadership for women isn’t so much a ceiling now as it is a labyrinth, where “you may not know all the rules,” Dr. Kerry Strayer said Nov. 10 at Bluffton University.

Noting the continued existence of gender stereotypes in the workplace, and a wage gap in which women currently earn about 80 cents for every dollar earned by men in equivalent jobs, the Otterbein University faculty member offered six strategies she said could help achieve workplace equality, with opportunities for women—as well as men—to succeed.

And why should businesses support a more gender-diverse workforce, asked Strayer, a 1984 Bluffton alumna and current university trustee. “Because your company will make more money,” she answered, citing studies that have indicated as such.

She suggested that prospective employees and leaders, especially women:

∙ Know yourself. “Know what you’re good at,” said the associate professor of communication at Otterbein. “Figure out where you want to be down the road.” She also advised her listeners—mainly students—to ask for, and listen to, feedback, and to pursue ongoing skill development via continuing education.

∙ Promote yourself. Perform beyond expectations; take initiative, and risks; and recognize, and negotiate for, your full worth, Strayer suggested, noting, on the latter point, that men are four times more likely than women to negotiate salary during a job search.

She also pointed to studies that have illustrated another stark difference between men and women in the workplace. Those studies have shown that men accept praise when things go well but look for an outside source to blame when something goes wrong. The opposite is true, however, for women, who tend to praise co-workers in good times and blame themselves for problems, she said.

∙ Choose your interactional and presentational style. She recommended, for instance, a blend of more stereotypical masculine behaviors—assertiveness and decisiveness, for example—with behaviors typically linked with women, such as warmth and positivity. “Wouldn’t you like a little of both of those in the workplace?” she asked, referencing another study in which both workplace leaders and followers concluded that “women leaders take care; men leaders take charge.”

∙ Network. Men, she pointed out, have long used the “old boys’ network,” so women should build social capital through increased networking of their own, whether in professional organizations, volunteering or creating collaborations with clubs, alumnae associations or friends, among other possibilities.

∙ Find a mentor or sponsor. A recent book, “Power Mentoring,” suggests “it is nearly impossible for a woman to reach top leadership without utilizing a helping mentor,” said Strayer. She proposed that prospective mentees determine what they would like to learn from a mentor; check to see if their company has a formal mentoring program and, if not, create their own; and then become a mentor themselves.

∙ Make good choices. “Find a good fit” for a job, and work at something you’re passionate about, she suggested. In addition, she advocated being accommodating, but also being yourself; seeking, and accepting, career assistance; learning to read your organization; and staying alert for opportunities.

“You are in charge of your life, and the choices you make, the impression you make and the way you interact will make all the difference.” 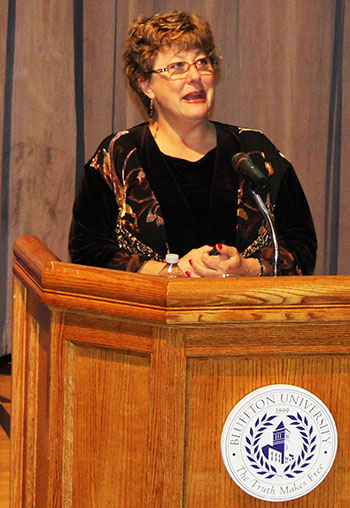 The limitation on leadership for women isn’t so much a "glass ceiling" now as it is a labyrinth, where “you may not know all the rules,” Dr. Kerry Strayer said.