Humanizing martyrdom: “Martyrs Mirror” and the artwork of Jan Luyken

During a Nov. 1 Forum at Bluffton University, Dr. David Weaver-Zercher, professor of American religious history at Messiah College, took students to the early 16th century in the midst of the Protestant Reformation. At that time, Anabaptists were cruelly punished for their beliefs.

“Catholics and Protestants didn’t agree on much, but they did agree on killing Anabaptists so they couldn’t spread their ideas,” said Weaver-Zercher, author of “Martyrs Mirror: A Social History.”

“Imagine being persecuted for what you believe in. The kind of persecution where you lose your home, your children and maybe your life. If you were in that situation and you lost your life, you would probably want someone to remember you and tell others so future generations could ponder your life.”

Collections of those stories are called martyrologies and the most famous martyrology for Anabaptists is “Martyrs Mirror.” The book, written by Thieleman van Braght, was published in the Netherlands in 1660. Twenty-five years later, an edition was published featuring the artwork of Jan Luyken.

Weaver-Zercher argues Luyken’s illustrations, created through copper etchings, shaped readers feelings towards the martyrs and their persecutors and humanized both in ways the text did not. “It’s a complex world in which we live, and I think Luyken brings out some of those complexities.”

Some of Luyken’s images portray martyrs as models of calm including Ursula Van Beckum, who is pictured with her hands folded in prayer ahead of being burned at the stake for heresy. An image of Joost Joosten shows stoicism in the face of persecution as he is being tortured with an instrument called an iron teerlingen.

Weaver-Zercher says other images show martyrs as “heroic but fully human” including the illustration of Hendrik Pruyt who is being burned on a boat at sea as he looks to the skies in despair.

Upon close examination, there’s much to learn from the portrayal of the persecutors as well. An image of the torture of Geleijn Cornelus shows his persecutors callously playing cards nearby. On the other hand, an image of the drowning of Heinrich Summer appears to show the man tasked with drowning him pleading to avoid drowning a second man, Jakob Mandel. In the background, a bystander can be seen dabbing tears away from her eyes.

“There’s an emotional power to the images. Luyken’s images get at you in a way that the text may not,” said Weaver-Zercher.

Weaver-Zercher said the most humanizing illustration of the Anabaptists’ adversaries may be the image of Dirk Willems, who rescues his pursuer from drowning While Dirk is clearly the hero in the story, his pursuer’s humanity—his fear of death, his willingness to ask Dirk for help—is also very apparent.

An illustration of Jaques D’Auchy’s visibly pregnant wife visiting him in prison shows the impact on the families of the martyrs. Luyken’s original copper etching plate of this image is currently on display in Bluffton University’s Musselman Library along with other “Martyrs Mirror” artifacts. The 400-year-old plate is one of just 31 known to still exist of the 104 original plates.

The plate as well as the entire exhibit catalogue will be presented at 7 p.m. on Sunday, Nov. 13 in Musselman Library. “I Have Not Forsaken the Word of God: Jacques D’Auchy’s Confessional Struggle,” written by Carrie and Dr. Gerald Mast and directed by Dr. Melissa Friesen will be performed at 7 p.m. on Sunday, Nov. 20 in Bluffton’s Ramseyer Theater.

While 400 year old stories of martyrdom may seem distant and foreign to students, Weaver-Zercher says there is a broader message that can be taken away from Luyken’s images.

“What we as professors in liberal arts colleges are trying to do is to get students to think about the world in complicated ways, and Luyken does that. The way he renders the art makes the stories of the martyrs a little more complicated.” 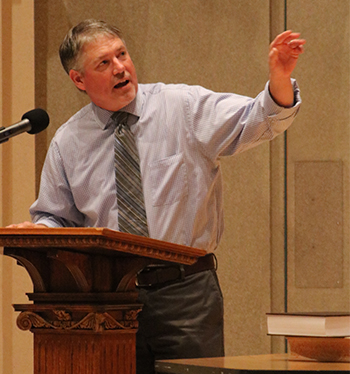