To begin a presentation on Christian faith and peace practice amidst the violence of Central America, Willi Hugo Perez, president of Latin American Anabaptist Seminary (Semilla) quoted Spanish theologian Juan Jose Tamayo, “Peace is one of the most precious and sought-after goods; but at the same time, it is one of the most fragile and threatened.”

Perez explained that these words are especially true in the current reality in Central America. “This is a land that longs for and thirsts for peace, yet Central Americans have grown accustomed to living with violence; an endemic evil that has become entrenched in this region for the last 50 years causing extreme suffering, pain and destruction.”

Semilla is located in Guatemala, one of Central America’s “Northern Triangle” countries consisting of Guatemala, El Salvador and Honduras. The Northern Triangle is one of the world’s most violent places due to the location being a strategic route for the drug trade between South American and North America. “Since the 1990s, organized crime has gained enormous power and control over state structures, political powers, and even in churches and religious institutions,” said Perez. “There has been an increase in political corruption, arms trafficking, money laundering and illegal drug production and trafficking.”

Perez explained that violence in Central America is compounded by other forms of organized crime including human trafficking, illegal adoption and the illegal sale of human organs. “These allow high profits for criminal networks while hundreds of families are buried in pain,” explained Perez.

However, because of the structures in place in these countries, there are few ways to escape poverty and the violence associated with it. Large percentages of young people in Central America neither study nor have gainful employment because of a lack of jobs, accessible education and government leadership. These hardships draw young people to the gangs.

The grave reality of the situation in Central America can be overwhelming, but Perez says “this is the reality that we as Christians are called to confront and to transform.”

Perez says Christians need to use the message of Shalom and non-violence to change the culture of violence in Central America. “It is only possible to achieve Shalom peace through nonviolence,” said Perez. “True peace involves dismantling ideologies, means and mechanisms of violence, war and destruction. (Is 2:4) “The outcasts of society, the young and those oppressed by violent social structures: children, women, slaves, sick, sinners, strangers and others were touched by his Gospel of love and salvation in a way that radically changed their lives,” said Perez.

Christians in Central America are living out the message of Shalom and Perez says he has found glimmers of hope. “We do not want to only lament the seemingly overwhelming darkness that engulfs us. We want to recognize that there are lights that glow in the darkness and transmit hope,” said Perez. “Countless believers, churches and communities work with faith and enthusiasm to reverse the violent and unjust situations and build another reality.”

Perez further explained each point including the outreach to gang members. “Some churches, such as the Mennonites, Pentecostals and the Catholics are working to rescue and restore members of gangs. In these countries, gangs have spread terror through extortion, thefts, drug distributions, assassinations and killings. Through methods such as holistic evangelization, pastoral accompaniment, psychological and medical assistance, and education, gang members are supported to leave the gangs, build new lives and reintegrate into their families and communities.”

Perez then outlined eight proposals for a peace ministry in a complex and violent context like today’s Central America.

“As we have seen, the current Central American situation is complex, overwhelming and challenging. But in this reality, we must proclaim peace, do it, recreate it,” said Perez. “As Christian in Central America, and other parts of the world suffering from violence and oppression, we are called to a renewed commitment of God’s purpose to redeem and transform the world” 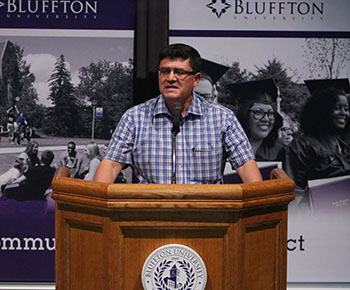