“While many of you are familiar with my passion for Bluffton athletics, at the end of the day, Bluffton’s academic programs and faculty were crucial for achieving success in life and career,” said Wannemacher. “Bluffton’s faculty and my academic coursework, in business and the liberal arts, instilled in me the ideals and values that helped me build my business to what it has become today. I am honored to be part of a campaign that will provide Bluffton students and faculty with state-of-the-art science facilities and move Bluffton forward.”

The announcement came at the end of a Sept. 14 lunch for Bluffton University faculty and staff where President James Harder announced the campaign goals and leadership.

“I believe this campaign will provide our students and teaching faculty with a much needed, new science building and also provide resources to sharpen our program delivery, grow Bluffton’s enrollment and move Bluffton confidently into the future,” said President James Harder.

The campaign has a comprehensive goal of $26 million with a high priority on opening a new science building in 2019. Campaign goals include:

Bluffton University’s 2014 facilities master plan process identified a new science center as the top priority for new academic facilities. In February, the university announced the Austin E. Knowlton Foundation of Cincinnati, Ohio, committed a $4 million gift toward construction of a new science building on Bluffton’s campus. This naming gift was the largest gift in Bluffton’s history and positioned the university to move forward with the Simply Innovate campaign.

“Every day, across this campus, employees simply get things done, in an unquestioned hardworking manner and, as our history tells us, innovation doesn’t have to be a complex operation, and can instead come from simple steps and creative decisions done every day,” said President Harder.

During the event, Dr. Hans Houshower, vice president of advancement, announced $9 million in gifts and commitments have been confirmed. With this project, Houshower is continuing the legacy of his grandfather who established Bluffton’s chemistry program in 1913.

“More than a century later, I am very pleased to play a part in extending my grandfather’s vision for outstanding and state-of-the-art science facilities with a new building,” said Houshower. “Bluffton faculty and students are already carrying out research and securing national internships with modest facilities and equipment – imagine what they will achieve with new facilities and increased financial support for program innovation!”

The campaign will be led by volunteer campaign co-chairs Wannemacher and Dave Baumgartner, class of 1982 from Berne, Ind.

“Bluffton provided transformative educational experiences for my grandfather, my parents, for me and Tanya and our sons, a daughter-in-law and other extended members of our family,” said Baumgartner. “We are very pleased that one of our sons is a member of Bluffton’s faculty, and we are committed to helping ensure that Bluffton is just as inspiring for our grandchildren and their children in the future.” 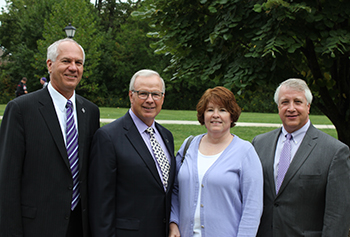