BLUFFTON, Ohio—Members of Bluffton’s class of 2020 were officially welcomed to the campus community during Opening Convocation on Tuesday, Aug. 30. The event begins with faculty entering Sommer Center wearing full academic regalia. The caps, gowns and hoods are worn just twice each year—to welcome new students during Opening Convocation and to celebrate graduating students at Commencement.

During the event, author Julie Burstein gave insight into this year’s Civic Engagement theme Creativity, the Arts, and Civic Life. Burstein is the author of “Spark: How Creativity Works” which was the summer reading for first-year students. Burstein noted that the students are undertaking one of the biggest transitions of their lives.

“They’re going from home and the security of yes or no answers, right or wrong, and fill in the bubbles to a place like Bluffton where they will need to question a lot of things they always thought were right and build the confidence to be able to question even their professors,” said Burstein.

Burstein, a Peabody Award-winning radio producer, TED speaker, and best-selling author, has spent her working life in conversation with highly creative people—interviewing, probing, guiding, and creating live events and public radio programs about them and their work.

During her presentation, Burstein acknowledged that the creative process is a difficult task filled with transition, conflict and friction. “I came up with this idea that conflict and friction are just energy and tried to share how we use it to move forward and how we hold ourselves so that it doesn’t overwhelm us.”

The creative process can be especially overwhelming to today’s college students. Many have just come out of highly regimented high schools where test scores are the measure of success. However, Burstein is encouraged by the fact that Bluffton is pursuing the daunting task of exploring creativity as the Civic Engagement theme.

“Creativity is one of the hardest things to do because there’s so much risk involved since you’re not following a prescribed pattern. A lot of the work initially is figuring out how do you ground yourself enough so that when problems come up, when frustrations arise, when the despair happens, you know you’re not going to break but instead bend and cope with it in order to continue moving forward,” said Burstein. That ability is key because “you have this new idea that nobody can tell you is right or wrong because it’s new. Nobody knows whether it’s right or wrong, but you must also understand when something you are working on doesn’t work.”

Burstein uses a lot of words with negative connotations such as struggle, friction and conflict, when discussing creativity, however, she has a hope for every incoming student going forward “to find joy in the creative process.” 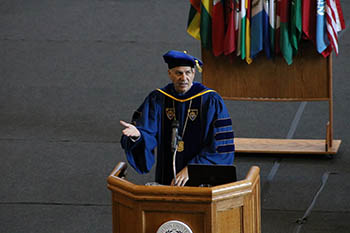