BLUFFTON, Ohio—The advice that college freshmen receive is always obvious or bogus, and given by people relating what they should have done when they were 18 or 19.

“Keep your eyes on what’s happening because it can land on your head,” Piercy recommended, urging her largely student audience to pay attention to politics because of its pervasiveness in life. Politics “creates or denies us opportunities,” she said, adding that “it gets you” if you’re not politically aware and, for example, there aren’t enough firefighters when “your candle ignites the curtain.”

Criticizing cultural focus on body type, celebrity and consumerism, the Detroit native also argued that what people really need is such things as learning, love, study of foreign languages—and travel to where they can be used—and friends.

“The time you put into others may turn sour, but it may be the only thing to keep you going” when hard times hit, she said.

Among Piercy’s 17 novels is “He, She and It,” which was this year’s summer reading for first-year Bluffton students. About 245 new students—also including transfers—were introduced following her presentation. The reading and the convocation kicked off campus consideration of Bluffton’s 2015-16 civic engagement theme, “Gender Roles, Relationships, Realities.”

Both American women and men are victims of the obsession with body type, Piercy maintained. The saying that one can never be too rich or too thin is still heard while “hospital wards are filled with women dying of anorexia,” she noted. And men continue to try to lose weight and to be more “buff,” sometimes by following “crackpot” diets.

“Most women want men who can fix the toilet rather than one who looks like an underwear model,” she said to laughter from her listeners.

If Americans spent as much time trying to change society for the better as they do trying to have someone else’s body, “this country would be a far different and better place,” she asserted.

“The world is run by fat, old men,” not by buff ones or by women “who want to look like little boys,” continued Piercy, a Cape Cod resident who has also written 19 books of poetry. But self-hatred about body type remains endemic, fueled by an “all-powerful” media that also promotes celebrities as being “made of better stuff,” she said.

At the same time, “the ‘war on women’ is a real war,” she added, decrying why women aren’t speaking up more about wage inequity and other social and economic issues.

And she reiterated her call for students to heed what’s going on around them. “Pay attention to the ‘human parts’ of life because they last best,” Piercy said, “and pay attention to what politicians do, because they’ll be doing it to you.” 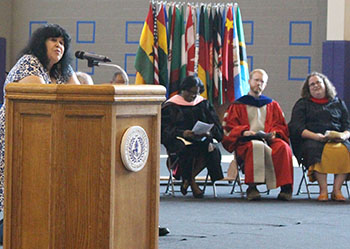 Keep your eyes on what’s happening because it can land on your head,” poet and novelist Marge Piercy urged Bluffton students, recommending that they pay attention to politics because of its pervasiveness in life.