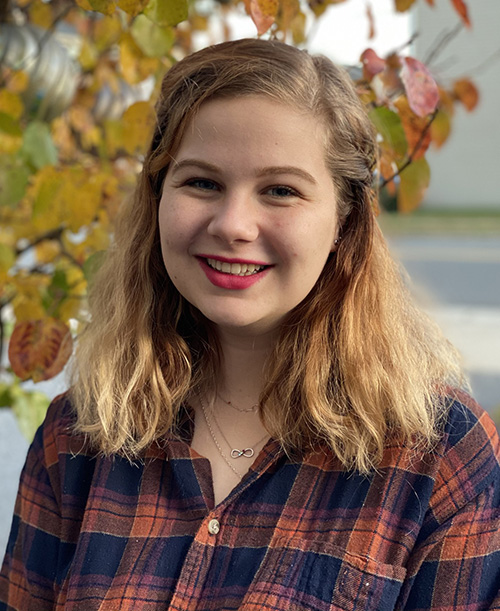 Jessica Baker is an undergraduate at Elon University studying Media Analytics. She is a writer for Cripple Magazine, The Pendulum, and wrote for her high school’s news magazine. In her spare time, she likes to bullet journal and read.

and i ate and i eight

There are ten of us. We span fourteen years and four states, us grandchildren. But growing up, there were the main seven—the youngest kids hadn’t been born, or if they had, they weren’t old enough to be with us.

My grandmother held court in Keenwick, Delaware, all summer—every summer. We grandchildren rotated in and out of the house like clockwork; she’d call for whoever fit her fancy that week and our grateful parents would deliver us, relieved at the break she provided.

Rarely did the parents—my parents, really—stay at the summer house. Aunts and uncles and grandmothers and grandfathers became my parents, in charge of me and responsible for me while my parents fell apart at home, away from us kids.

But we kids—we kids only knew the summers, the bikinis and the tans and the boat and the ocean and the snow cones and boardwalks and happiness.

We kids knew that we were blonde and beautiful, spoiled and loved, curly-haired and jubilant and everything to our grandmother.

My grandfather loved his grandsons, as grandfathers often do, but my grandmother had four sons and no daughters. Seven granddaughters—five, on constant rotation—made her overjoyed. As each of us was born, she named us after the flower she thought would fit us best, creating her garden of granddaughters. She blessed us every day, thanked God for her beautiful, perfect, granddaughters, and we smiled along with her, failing to understand the severity of her prayer. Thanked God for the blessings He had given her, being able to house all of her flower garden under one roof, in one room.

I looked down at lean arms and a toned stomach, built from years of tae kwon do and hardened by national titles earned earlier that summer and competitions around the country. “What?”

She looked at me, and roughly forced me in front of the mirror. I stared back at my bikini-clad body, failing to see the word fat.

“You should take some of your butt and move it to your chest,” Morning Glory commented. “Guys don’t like girls with butts.” She lounged on our bed, staring at the red marks rapidly rising on my skin.

And that day, that summer of nine, I stared in the mirror until I finally saw the fat they meant; finally saw the imperfections on my skin, the places where they were trim and I was not; the thick thighs I already had compared to their slim ones. They left me staring when they went out, and by the time they came home, I’d used scissors to shred every bikini I owned.

I wasn’t quite ten when I shattered my foot sparring, ruining my tae kwon do career. My lean muscles went away as the calories didn’t match my exercise, as my bookworm lifestyle took over from the four hours I had spent training each day. I was finally ten and it was summer again and my cousins stared at me, grimaced as they told me I’d put on weight, and I swallowed back my shame.

It’d become a game, among us cousins, to see who could count the number of popsicles I ate in a day. Wrappers were stolen from the trashcans, cousins would eat them and pass them off as belonging to me, and I’d cry to my grandmother at the end of each day, wondering what I did to deserve this treatment.

She took me by the chin one night, forced me to look her in the eye.

Ocean City had these photographers that roamed the sands, looking for families with young children to exploit and photograph and pose and make easy money off of. They wore tiny red bikinis—always girls, never guys—and walked with a camera bag around their waist, Nikon held loosely in their hands.

We flower cousins liked to consider ourselves locals, above this tourist trap and beyond the clearly structured beach photos.

But our aunts—so drunk they didn’t know what was happening until we brought home the order form—insisted we get a family photo one day. “For grandma,” they told us as they crooned over our youngest strutting in front of the camera, laughing and grinning.

She lined us up in her standard roulette of shots; we held hands and jumped, the sisters took photos, cousins were staggered oldest to youngest, then tallest to shortest.

But our final photo was a stacked one. Rose—our oldest—was to be on the bottom, and I was to lay on top of her, and Morning Glory on top of me, and so on, until we made a stack seven children high.

“Buttercup should be on the bottom,” Rose whined. “She’s the heaviest. I don’t want her crushing me.”

My cheeks burned, and an aunt wordlessly passed me sunscreen, thinking I had simply been in the sun too long. “Rose,” her mother chided. “You love being the oldest. How come you don’t want to be on the bottom?”

I busied myself with burying my toes in the ground, as if that would be the first step to disappearing entirely. “Rose,” my aunt said again. “That’s not fair.”

And I knew, right then, what my entire family thought of me.

Rose whined and complained until the photographer nearly gave up entirely before she finally settled into the sand, and I reluctantly climbed on top of her. Morning Glory laid on top of me, Bluebell on top of her, Daisy, Lilly, and our only boy completed the set.

We’re all smiling in the photo, but the red of my cheeks is unmistakable.

As the girls got older and the fights became cattier, my grandmother stopped cycling us through at the same times. Rose and Morning Glory moved to a house on the same street; I saw them daily, but not nightly. Bluebell and Lilly stopped coming all together when my uncle (my grandmother’s youngest) determined the drive was too far and Christmas was enough.

Daisy and I occupied a room that once held six girls, now down to two. Our furniture and cabinets and artwork and mirrors did not change with us. We haunted the same bedsprings and mattresses and falling-apart dressers and cracked-in-the-corner mirrors. I still saw myself in that same mirror, pinching at love handles and too thick thighs and squeezing my butt as if that would somehow shrink it. As if sheer determination would make me skinny.

I learned, over time, that I was the fat cousin.

The Fat Cousin, they said.

Year after year after year and I would return to that house, those memories, those mirrors. I would stare at myself in a bikini until I no longer recognized the girl in the reflection, until I understood this was what it meant to be objective. Until I stopped eating and started swimming and stayed awake all night, telling myself the calorie counter would reset to zero in the morning and these hunger pangs would go away.

Morning Glory was glorious with her rich blonde hair, trim and slim, with her mother’s long legs. Rose had the butt—not too big, but enough—and the tiny waist and the perky boobs that sent all the boys into a frenzy. Daisy had the curves and the thighs and the face that would kill a man if he dared to look.

When I stood among my cousins for photos, the differences were clear. My face was rounder, my boobs were bigger, my stomach wider and the rolls so prominent, my thighs stuck together where they had that oh so desirable gap. I was overlapped, hidden, positioned so they mitigated my differences and made me look like a flower cousin.

I was fourteen when my appendix ruptured.

Later, they told my dad that they had such a hard time cutting through my abdomen when they encountered a wall of muscle. Suck it up, Buttercup, had hidden abs beneath her flab. I used the excuse of scars lining my midsection to switch to high-waisted bottoms, and I didn’t stare at myself as long in the mirror. I hid in a respectable fashion; something trendy and in style gave me an excuse to be more than The Fat Cousin.

But every summer, without fail, the scale tips higher. The numbers grow larger. They dip and they fall when I stop eating and start swimming and everyone tells me I’m finally starting to look good, so good, wow Buttercup!

Suck it up, Buttercup, but I’m still hidden in photos.

Suck it up, Buttercup, and I’m still crying in my room when Rose tells me she felt sick looking at me today.

Suck it up, Buttercup, and this Buttercup is tired of rolling with the punches. Letting them land on her soft parts, letting sharp pinches from blood red manicures ruin her face and arms and legs and butt. This flower is wilting, its stem dying from lack of water, yellow fading and falling.

It takes a girl with bright blue hair who people often mistake as my sister to get me to love myself. To see my curves as beauty, my boobs as bouncy, my butt as boy friendly. It takes years of therapy to overcome eating disorders I didn’t know I had, years of coping with the fact that my family doesn’t want me for who I am, years of retraining my brain to see the girl in the mirror as Buttercup, and not The Fat Cousin. It is just as easy to fall back into old habits when I am allowed to make my own food choices; when I have lost twenty-five pounds since starting college and my family looks at me with stars in their eyes, saying I finally look so good.

My college tuition depends on my dietary habits; “If I can make it through four years without getting diabetes.” My familial love depends on my self-love; “You look like a whore in that dress.” My place within my flower cousins depends on looking just right in the photos; “Buttercup, can you take this one of us? Rose and I want to be able to post it.”

I am a women’s size eight.

I am curvy, and well endowed, and round cheeked.

I am, undeniably, the largest of the grandchildren.

Those beach photos hang upon my grandmother’s wall and I sit there with her, clutching her hand as she, our gardener, wilts in her last summer. “Why don’t you think you’re pretty, Buttercup?” she asks me when she finds me staring at the frames.

I don’t think I’m pretty, I can’t say, because I am the same size as Rose and Morning Glory in those photos, and they still called me fat.

“Good,” she says, and squeezes my hand. “Because I named you after what I adored most in this world and knew you would too.”

I have to swallow back years of hurt and pain and tell myself I know better now. That I love myself now. It might have taken me years to find it—my sunshine, my buttercup glow—but I did. I found it within my curves, my dimples and my cleavage, my thick thighs and swollen fingers and round cheeks.

She nods. “I named you after happiness.”