Luz Varela is overworked, stressed and tired. But she’s also angry, and she wouldn’t have it any other way. Varela, a 2015 graduate of Bluffton University, is working as a legal assistant at the Refugee and Immigrant Center for Education and Legal Services (RAICES).

As a Mennonite, she recognizes that concepts of peace and reconciliation are held in higher esteem than anger, but “I want to do good in the world, but I also think we need to ‘get angry’ about the world to make changes. I think anger drives the strong feelings needed to make changes in the world. That’s what’s been fueling me,” said Varela.

She’s angry because she knows no matter how hard she works for the refugee women and children who come to the United States to escape abuse, hunger, gangs and a host of other life-threatening concerns in their native, Central-American countries, the laws are not set up in their favor.

Varela shared that fiery message with students when she returned to Bluffton University on Oct. 18 to present a Forum titled “#ProtectRefugees: The Criminalization of Immigrants in the United States.” During Forum, Varela chronicled the 18 months since graduation.

Through Mennonite Voluntary Service, Varela was assigned to work at Casa RAICES. The emergency shelter opened in September 2015 under the organization to provide immigrants, who are rounded up by border patrol, brought to detention centers and then released pending court proceedings, a place to spend a night or two before heading out on lengthy bus trips. Varela started volunteering a month early for the program because the need was so great. One of Varela’s responsibilities was to keep track of the number of people coming and going from the shelter. She says in one year, close to 10,000 women and children came through the doors of the 10-bedroom, four-bathroom shelter.

Varela worked at the shelter for a year and ended her MVS term a year early to delve more deeply into the work at RAICES. As a legal assistant, one of her roles is to inform unaccompanied children detained at the border by Immigration and Customs Enforcement (ICE) agents, of their rights in this country.

“When I meet with these children, I ask the question, why are you in this country? For them, the answer is so simple. ‘I want to go to school. I’m poor.’ They don’t elaborate. They live in the present,” said Varela. “These immigrants that come here have such basic reasons why they are here. They aren’t coming with an elaborate plan of overtaking the economy. They come to get their basic needs of life met—food, shelter and a place to feel safe.”

In South Texas, women and children who cross the border are sent to family detention centers in Karnes and Dilley, Texas. The centers are described as safe housing for women and children who are awaiting their due process before immigration courts. However, Varela described them simply as prisons and read from a letter sent to Homeland Security Director Jeh Johnson which was written by asylum-seeking mothers at a third family detention center in Berks, Pa., during a hunger strike to end their unjust imprisonment.

She read, “We left our homes in Central America to escape corruption, threats and violence. We thought this country would help us, but now we are locked up with our children in a place where we feel threatened, including by some of the medical personnel, leaving us with no one to trust.”

Varela is an immigrant herself. She was able to enroll at Bluffton through the Dare to Dream scholarship program. The scholarship fund, established by a group of Bluffton alumni, faculty and staff, provides support for undocumented, immigrant children in the United States who are ineligible for federal aid. They are often referred to as DREAMers because of the failed legislation known as The Dream Act (Development, Relief and Education for Alien Minors Act).

Her mom fled Mexico in search for better opportunities with Varela and her siblings when Varela was a child and moved to Goshen, Ind. Her mom now has residency status, and Varela is currently protected from deportation because of President Obama’s executive action known as DACA (Deferred Action for Childhood Arrivals). DACA allows undocumented immigrants, who entered the United States before their 16th birthday and before June 2007, to receive a renewable two-year work permit. DACA confers non-immigrant legal status but does not provide a path to citizenship.

“Immigration is really close to my heart because I am an immigrant, because I am an undocumented immigrant. It’s very important to me because I feel like I belong to this country even though I have millions of voices around me telling me I don’t,” said Varela. “It’s constantly living in that limbo that I belong because I grew up here, and I’m benefitting society but also hearing people telling me “No, you are not part of us.”

As an immigrant, Varela has faced many challenges, but she says her struggles don’t compare to the immigrants she meets through RAICES.

“I’m so involved in this because I know what it feels like to be an outsider, but this is such a different kind of suffering.”

And the number of people suffering is overwhelming. According to statistics released by the Department of Homeland Security on Oct. 17, 2016, 408,870 people were apprehended on the United States southwest border from July 2015-June 2016 including nearly 60,000 unaccompanied minors. 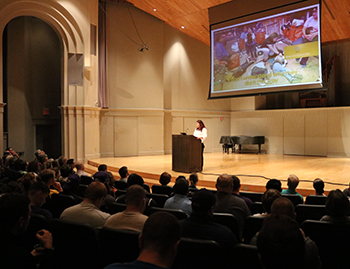