Legacy gift commitments sustain Bluffton for the future. Gifts from sisters Jeannette Sprunger Bechtel ‘63 and Shirley Sprunger King ‘67 and their families ensure Bluffton’s enduring values of discovery, community, respect and service will live on for generations to come.

For sisters Jeannette Sprunger Bechtel '63 and Shirley Sprunger King '67, of Goshen, Ind., attending Bluffton was family tradition since their parents were graduates and their older brothers also attended Bluffton.

“Bluffton was our family college, and we always knew we were going to go there,” said King.

It is Bluffton’s lasting impact that inspires the sisters, along with their husbands, to continue to support Bluffton.

After graduating from Bluffton in 1963 with a teaching degree, Bechtel and her husband, Thomas, left for the Congo with Mennonite Central Committee, where she taught second grade and Thomas distributed supplies for MCC. They returned to the states and moved to Goshen. Bechtel worked in personnel at Goshen College, then in a preschool setting and recently retired as administrative secretary at Eighth Street Mennonite Church. She fondly remembers history classes with Dr. Robert
Kreider and working at the library with Delbert Gratz.

Although Thomas attended Bluffton for only two years, the couple is grateful for and uses a match provided by the company he retired from to increase their support to Bluffton.

“Bluffton left an impression,” said Bechtel. “My husband and I gained a lot from attending Bluffton.”

King, a music performance major at Bluffton with organ as her focus, continued her education after Bluffton and earned a doctorate. With her husband, Vernon, she also served with MCC in several locations for eight years after which she became a professor of music at Bethel College (Kan.) and retired as dean of advising at Dickinson College in Pennsylvania.

“When I became a college professor, I often thought back to the mentors and the faculty members at Bluffton to figure out how they left such an impression on me and determine how I could model that as a professor myself,” said King.

When drafting their wills, both families chose to include Bluffton University in their estate plans.

“We’ve always been committed to Mennonite education,” said King. “It just seems like the natural thing to do.”

We’ve always been committed to Mennonite education. It just seems like the natural thing to do. 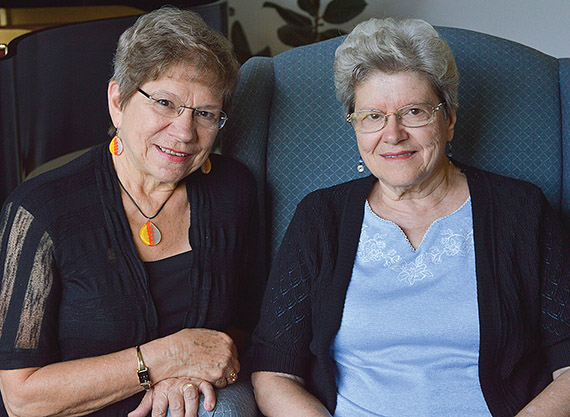