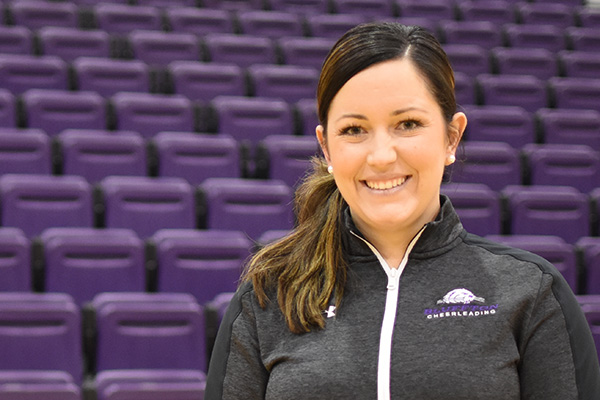 Cheerleading coach Morgann Rode grew up in the cheer/STUNT community.

Starting in the 2019-20 season, Bluffton University will offer a competitive cheer/STUNT program led by Morgann Rode. After serving as Bluffton’s cheerleading coach for the past three years, Rode is excited to expand the opportunities available on campus. “Bluffton is one of just a few smaller schools that will have a program like this,” said Rode. “We’re really moving forward and developing this program the right way. It’s going to be a big thing on campus, and I can’t wait to get Bluffton’s name out there as we travel to competitions.”

Rode grew up in the cheer/STUNT community. Starting at the age of three, she cheered on midget, middle school and high school teams and was highly involved with the Lima Rebels All-Star Cheerleading team. She coached the Rebels for seven years before coming to the university, and she enjoys the challenge of working with college students.

“At Bluffton, I’ve discovered that the students come in with a mentality that they want to work hard and want to learn new skills,” explained Rode. “My favorite part of coaching is watching them perfect and build upon their skills.”

She says team veterans are also eager to bring in new people and teach new skills. “It’s amazing to see how the group evolves every year.”

As for new students, she knows they appreciate the support system that comes with being a member of a cheer/STUNT program.

“When you’re new to college, you realize that now you’re an adult and you have to take care of yourself,” explained Rode. “It’s nice to come in and be part of an established group with interests that you’re already familiar with. You’ll get to meet people who are from different towns and are pursuing different academic interests, but you’ll also build a family to support you.”

Rode is also ready to share about Bluffton’s new program. For the last several years, the university has welcomed hundreds of young, competitive cheerleaders to campus through events and camps hosted by Champion Force Athletics including a weeklong summer camp.

“We’re excited for our cheerleaders to engage with the kids coming in and just be at some of the competitions to support them.”

But mostly, she’s ready for Bluffton to show off its competitive side. 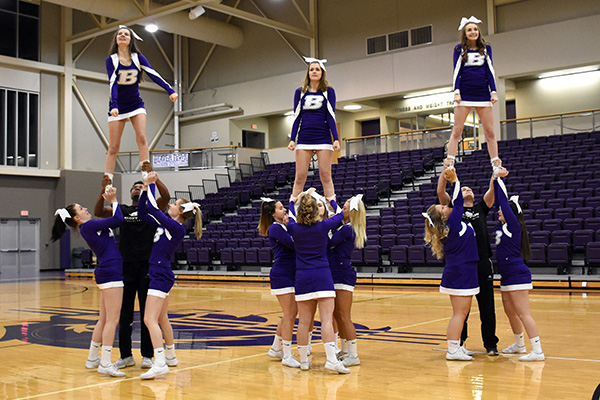 Starting in fall 2019, Bluffton will have a competitive cheer/STUNT team in addition to the current football and basketball cheerleading squads.