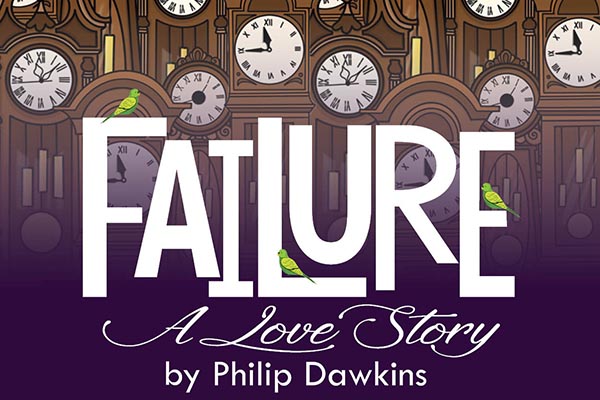 From the opening scene of “Failure: A Love Story,” the audience learns the three main characters all die. However, Bluffton University’s fall play about three sisters and the man who falls in love with each one has plenty of wit as well.

“I wasn’t ready for a complete comedy. I wanted a play that could tap into feelings of loss, considering everything that has happened in the last couple of years,” said Dr. Melissa Friesen, professor of theatre and director of the show. “There is a lot of humor in this play, but there is also a healthy balance of dramatic moments.”

Set in the 1920s in a Chicago clock shop, the play features seven student actors, inanimate objects brought to life and a unique set design.

“I love that our students have the opportunity to design the clocks and animals that come to life as voiced and manipulated by our performers,” said Friesen “Alongside the puppets, we’re also using an overhead projector for ‘shadow puppets’ for lack of a better term. The creation of the puppets and cutouts for the overhead projector are all being done by students. This play is really giving our theatre assistants the opportunity to shine.”

While Friesen said it’s a struggle to narrow down the fall play options each year, she considers which stories will be a good fit for both the audience and the student actors. What drew her to “Failure” was the flexibility written into the script.

“My favorite part of directing a play is problem solving a scene with the actors. I give the actors a loose outline, but after that, I want to see what the actors bring,” said Friesen. “They use their voice and bodies in ways I wouldn’t think of.”

“Live theatre is just now restarting and some people are not ready to attend full-scale events,” said Friesen. “The two socially-distanced performances will provide an option for people to see the play without having to sit in a full house.”

Performances of will take place Nov. 4-7 in College Hall’s Ramseyer Auditorium. Masks are required at all performances.

Tickets can be purchased at www.bluffton.edu/tickets or by calling the box office at 419-358-3239.

“Failure: A Love Story” was written by Philip Dawkins and was produced by special arrangement with Playscripts, Inc.

Colorful characters and a whimsical chorus tell the story of three sisters, their brother and an ardent suitor.