Many students come to Bluffton with a career path in mind. Some want to be teachers. Other students want to pursue social work or science. Not many students say, “I want to be an insurance claims adjustor or an insurance underwriter when I graduate.” However, several Bluffton alumni, who are currently thriving in the world of insurance, returned to Bluffton for the Forum “Accidental Career” on Oct. 25 to share the wide array of opportunities available in the industry.

Some Bluffton students are taking advantage of the opportunities before they even graduate. “We have two students with full-time internships next semester, one in Columbus and one in Cleveland, and they’re getting paid $16-$20 an hour plus a housing allowance just to do an internship,” said Dr. George Lehman, professor of business. “Those are clearly companies hoping to recruit those students full time.”

Shipp says about half of the people working in the field are expected to retire in the next ten years, and that means there is a growing demand for new employees.

“It’s an opportunity to really fall into something. That’s why we titled this “Accidental Career” because none of us purposely went to school to get into this career,” said Shipp, who was a business administration major. “We got opportunities once we started, and we decided to stick with the industry because it is so flexible and it fit our personality styles so well.”

Shipp said he originally planned to work in the field for six months or so just to get some work experience out of college. Instead, he’s been in the insurance industry for more than a decade.

While some of the other panelist never gave much thought to insurance before graduation, insurance is the family business for Wakefield. His father is also a State Farm agent, but he planned to purse business or ministry after college. Instead, he says he found the best of both worlds in insurance.

“For me there’s no better career, especially as a localized agent. It is difficult to find a career path where you actually get to know people and get to help them out when bad things happen,” said Wakefield. “I get to be the one who is giving them something to look forward to, a check to help them fix the situation and a listening ear when they need to talk.”

While Wakefield’s outgoing personality is perfect for sales, Short said there are plenty of opportunities for all personality types.

“It’s not just sales. You can be super successful with sales, but I personally wouldn’t want to do sales. You can be a claims adjustor, you can be an underwriter, there are endless opportunities really,” said Short. “I constantly see emails about people moving up in the company and getting promotions. We (Auto-Owners) operate in 26 states, so you can stay local with the company or move clear across the country. I think if you’re willing to work hard, it can be a great career.”

Short was hired by Speicher after completing an internship with Auto-Owners while at Bluffton. He’s hired several Bluffton graduates. “We have our core set of values as a company at Auto Owners and obviously Bluffton has its own set of values, and we just mesh well,” said Speicher. “The type of person who is attracted to Bluffton is the same type of person who will, generally speaking, succeed at Auto Owners.”

Speicher echoed the sentiments about insurance being a highly rewarding career. “We help people put their lives back together in their darkest hour, and that’s when they need us. It’s a privilege to help people get back on their feet whether it’s due to something like Hurricane Matthew or whether a loved one has passed away and they had a life insurance policy with us for the people they leave behind.”

Because so many Bluffton graduates end up in the insurance industry and because the need for graduates is so high, Bluffton will offer a trial-run class during the spring semester called Principles of Insurance and Risk Management. The course will provide an introduction into the fields of insurance and risk management including property and casualty, life, health, and auto insurances.

“We’re piloting the class to see whether or not it gains interest. If it does, we could develop a set of courses for a minor or something along those lines,” said Lehman.

Lehman added that this is one way to get young people interested in pursuing a career in insurance. “A lot of people go into insurance without preparing for it, but we think it would be advantageous to have graduates who are prepared for the industry.” 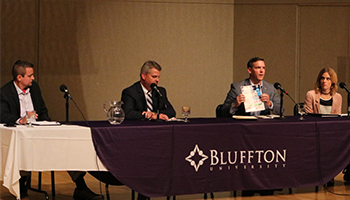