Stacy Taylor is a believer in what she calls "karma credits," and based on her career odyssey of late, with seemingly good reason.

The 2004 Bluffton graduate is convinced that those who help others will be rewarded eventually. She's seen it happen in her life in the last year, when she landed a job as stage manager for a touring, Tony Award-winning Broadway show, "Spring Awakening." That tour ended in Ma 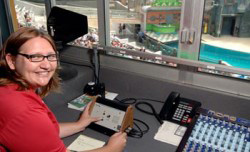 y, but she's been rehired for a national tour of "South Pacific" beginning this fall.

Between theatrical road trips, she's been working with a different animal—literally—as this summer's stage manager at the Sea Lion Stadium at SeaWorld San Antonio.

Taylor was recommended for the "Spring Awakening" job by a sound technician she had previously recommended for a position with the same show. Her repayment for that kindness was part of a series of opportunities that have kept coming her way despite a virtually nonexistent background in theatre until 2007.

"It's a little surreal," says the Kenton, Ohio, native, whose Bluffton degree is in music education.

A transfer student, Taylor says "I knew Bluffton would be a really good fit" when she talked to music department representatives and auditioned at the university. Once she moved onto campus, she discovered that music faculty and staff treated students well, establishing rapport and taking care of them as individuals, while still ensuring they knew what was expected of them, she explains, specifically citing Dr. Mark Suderman, professor of music, and Jodi Diller, the department's administrative assistant. "I think my experiences at Bluffton have a lot to do with who I am now," she adds.

"I thought I wanted to teach," Taylor recalls, "but I always said I wasn't going to stay 30 years if I didn't like it." Feeling restless halfway through what would ultimately be three years as a music teacher—and having been stage manager for a few shows while a student at Kenton High School—she first considered becoming a theatrical lighting designer.

Talking with friends, she was told "you're a stage manager," an assessment that was "very much a personality thing," she says, pointing out that she can be aggressive but still liked. So, in 2007, she applied to enter the University of Cincinnati College-Conservatory of Music's program in theatre design and production. And along the way to her master of fine arts degree, with an emphasis in stage management, she gained invaluable experience.

Taylor was also a production assistant during rehearsals and technical preparation for a national tour of the musical "Hairspray." In another "karma credit" scenario, the stage manager was a man she had befriended when he interviewed for admission to Cincinnati's stage management program. He didn't get in, but they remained social networking friends and, when she went to New York months later, he was working on "Hairspray" with the production company NETworks Presentations, and asked if she would like to join the crew.

As the "Spring Awakening" tour was ending last spring, she responded to SeaWorld's posting for seasonal stage managers. "I have never worked with animals before," she notes, but took on the job of running four to six shows per day starring sea lions, walruses and otters.

Regardless of the venue, Taylor says, "stage managing is a lot of paperwork," including taking notes on performances. The SeaWorld animal trainers who double as actors have been more receptive to her notes than stage performers she has worked with, she adds, praising their dedication to the job.

On Aug. 15, three days after her summer at SeaWorld ends, four weeks of rehearsal begin for the "South Pacific" tour, which is currently booked into June 2012. But Taylor is definitely not complaining, just continuing to take the opportunities as they come.

"Right now, I'm having a lot of fun doing this," she says, pointing out that a never-ending job search goes with the theatre territory. "We'll see what the world brings."