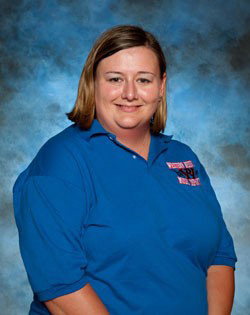 It started as an effort to motivate 67 seventh- and eighth-graders, many of whom really didn't want to be in the Western Reserve Middle School choir.

Six months later, in March 2010, they were in the "World's Largest Concert" video, representing one of only 30 or so schools whose choirs were chosen to appear.

And what will they do for an encore? "Try to do it again this year," says choir director Elizabeth Dick, a 2000 Bluffton alumna in music education. "That's our goal, to get accepted again."

Before she arrived in 2008, there was no middle school choir at Western Reserve, a small school district about 20 miles west of Youngstown, Ohio. And when the program was added that year, it was part of a requirement that seventh- and eighth-graders take either band or choir.

That first year, when she had her choir sing along with a DVD of the World's Largest Concert—produced annually since 1985 by MENC: The National Association for Music Education—the middle schoolers were less than impressed, she recalls.

Last fall, thinking that having a goal would make the group better, she took a different tack. The teacher told her students they would look through the MENC music, pick two songs to practice and submit a proposal to the association in hopes of being picked to be in the video.

They chose the national anthem and "Koinobori," a Japanese folk song about carp-shaped wind socks traditionally flown to celebrate Children's Day, a national holiday. The students thought streamers and paper dragons would be interesting additions to their rendition of "Koinobori," and an MENC committee apparently agreed, selecting Western Reserve's choir as one of several to appear in the montage video of the song.

In December, a choir mom taped the performance in the middle school gymnasium. When the finished video, including a roughly 30-second clip of the choir, was shown there three months later, "the gym just went wild," Dick says.

In addition to providing an incentive to work harder, the experience changed some of the students, making them more excited about choir, she says. "For them to know they were going to be shown around the world, that was really something big to them," explains the North Lima, Ohio, native, who helps the high school marching band along with teaching K-8 general music.

But the biggest change, she adds, might be in the strictly voluntary high school choir, which had only 16 members last year but has 37 signed up to sing in 2010-11. A number of them had to be in choir as middle schoolers the last two years, "but they got there, and now they like it," notes Dick.

Her choir's video appearance was only part of a satisfying school year in 2009-10. In August 2009, she was notified that a tip she had submitted to composers Jill and Michael Gallina would be included in "Puttin' on the Kidz," their book about staging middle and high school musicals. The book, with her tip—about using freezer ice pops as a reward to helpful students as well as a remedy for tired, scratchy throats—was published in April 2010.

Dick decided on a music education career the summer before her senior year of high school. Attending a flute camp at Ohio State University, "I realized at the final concert that this wasn't something I wanted to give up," she remembers. "It was almost like God said, 'This is it. This is something you've had too much fun not to do.'"

Looking to pursue her degree at a small, Christian college, she settled on Bluffton after visiting campus and meeting with music faculty and music majors, who "seemed like the kind of people I wanted to spend four years with," she says.

Ten years after graduation, she doesn't regret her decision. "I got a wonderful education at Bluffton, especially in the music department."