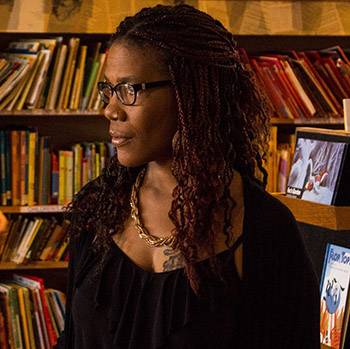 Interview with a writer

FALLING FLAT ON YOUR LITERARY FACE: AN INTERVIEW WITH WRITER ANGELA JACKSON-BROWN

Angela Jackson-Brown (www.angelajacksonbrown.com) is a prolific author who is well acquainted with a variety of literary genres and uses her understanding of each to give her stories their strongest voice. Her writings encompass prose, poetry and playwriting, a versatility that many young writers might find daunting. Nonetheless , she encourages others to stretch their literary muscles, set realistic goals, and ultimately be bold writers.

“Writing is what sustains us, but it is not often what supports us,” explained Jackson-Brown. “So, make sure you write because you cannot imagine yourself not writing. Write because writing fuels something in you that nothing else does. Write because living would not be possible for you if you did not write.”

Growing up surrounded by books, Jackson-Brown always wanted to be a writer. However, she points out that many of those initial books were primarily about “little white girls,” something she found concerning. “Not to say I wasn't inspired by books by writers like Laura Ingalls Wilder or Louisa May Alcott, but they didn't write stories that ‘spoke’ to me,” she said. Soon, young Jackson-Brown began to wonder if people of color could be writers too.

Jackson-Brown’s third-grade teacher, Mrs. Kennedy, opened up a new literary world to her with Maya Angelou’s I Know Why the Caged Bird Sings. It was only then that Jackson-Brown realized that black people not only could be writers but also were prolific and bold authors.

“I know that sounds strange for such a voracious reader to not realize anyone could write a book,” said Jackson-Brown, “but honestly, the only books I had read were written by white writers.” This revelation stuck with her and continues to be influential in her own story telling. It fuels her own desire to be a writer, to give voices to the stories not always told. In this way, Jackson-Brown uses multiple forms and genres that “fit the story” she is telling.

“Some ‘stories’ fit better as poems, others fit better as short stories or novels and then others cry out to be acted on the stage,” she explained. “I would like to believe that most writers want to stretch themselves and explore new characters, new plots and new forms of expression.”

Currently an assistant teaching professor of English at Ball State University, Jackson-Brown works to find her own balance between teaching and writing. “I am a teacher. I cannot shortchange my students for my art, but I can set realistic goals so I can decide every day I will devote some time to my own writing,” she said.

She also notes that while she does make time for writing, she ensures that the ritual isn’t cemented but flexibly regimented instead. “I don’t beat myself up if I am not able to accomplish what I want to accomplish. So often, we writers give ourselves unattainable goals.”

Jackson-Brown graduated from Troy State University, Auburn University and received her MFA in Creative Writing from Spalding University’s low residency program. It was during her MFA program were she learned the importance of writing boldly. “We were told to not be intimidated by any style or genre of writing,” she said. Students were encouraged to explore every genre and “never led to believe they had to pick one.”

It is this versatility that allows Jackson-Brown to dance across multiple genres, such as prose, poetry and playwriting. This ability to express using a variety of genres gives way to the message of each piece being tailored to and adapted to provide the clearest message. “I tell myself that no matter what story I am trying to tell. I don’t have to be intimidated by any form or style of writing because at the end of the day it is words on paper.”

Many writers of color influenced Jackson-Brown and her work that she does today. Prose writers like Maya Angelou, Toni Morrison and Alice Walker, Tayari Jones; playwrights August Wilson, Lorraine Hansberry and Ntozake Shange; and poets such as Nikki Giovanni and Gwendolyn Brooks all stand as her literary inspirations and offer materials to read and grow by.

“Writers need to be students of the written word first,” Jackson-Brown explains. “Then they can better understand how to develop their craft. I study the writers who came before me and paved the way for me to create. I want to try and understand how they tell stories and then incorporate the best of what they have done in my own writing. I am always in student mode.”

In closing, Jackson-Brown understands the daunting tasks that lie ahead for many young writers. Exploring multiple genres and forms, developing achievable goals and pursuing a bold way of writing may prove difficult at times, but it is certainly possible. It is a matter of allowing the weight of successes and failures to dissolve and focusing instead on the craft, enjoyment and voice of the writing.

“Don’t be afraid to fall flat on your literary face. It’s okay,” said Jackson-Brown. “Sometimes we need to screw up big time in order to figure out how to write a masterpiece the next time. So, be bold and be brave with your writing.”