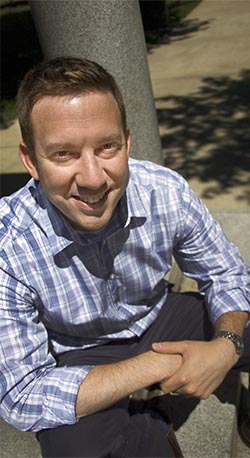 Dr. Andrew Bixler says he "took a leap" when he decided to major in psychology despite having taken no psychology courses his first two years at Bluffton.

Thirteen years later, and three years removed from earning a doctorate in the field, he has made another jump, this one involving service at opposite ends of the age spectrum.

After roughly 18 months of practice in which he did contract work with nursing homes in northeast Ohio, Bixler has started a new job, working with young males at the Indian River Juvenile Correctional Facility in Massillon.

Finding a fit.
Bluffton "was just a good fit for me" from the beginning, the Orrville, Ohio, native recalls, but finding the right major proved more elusive. He wasn't inspired by his first choice but, through the general education program, "stumbled into" psychology readings he enjoyed in an Introduction to Social Science class.

A combination of two factors ultimately convinced him to pursue psychology, Bixler says. It helped satisfy his intellectual curiosity about why people behave as they do, and he realized that, as a profession, it would enable him to be a helper, he explains.

As he got further into undergraduate psychology coursework, he also realized that in order to make it a career, he would need a doctorate. So, two years after graduating from Bluffton — including one year as a case manager at a mental health agency in Canton — he entered the psychology doctoral program at Wright State University outside Dayton.

Further preparation.
Comprising his graduate program were four years of academic work and clinical experiences, followed by a one-year internship. Among the sites where he served the internship was a Cincinnati facility — "one step away" from a correctional facility, he notes — for adolescent males with mental health and substance abuse problems.

After graduation, in 2010-11, he continued to supplement his training at a mental health clinic in Dayton, during a postdoctoral fellowship required for licensure to practice in Ohio.

Both ends of the spectrum.
Following his fellowship, Bixler and his wife, Whitney (Lehman '02), moved back near their northeast Ohio roots, to Medina, where he started his nursing home work. A lot of it, he says, was with patients in need of emotional support as they adjusted to new, challenging circumstances. But he also dealt with long-unresolved trauma, "bubbling under the surface for many decades" in some patients.

Interest in violence prevention and in mental health/treatment of males — especially in how traditional ideas about masculinity can be emotionally harmful — drew him to his new job at Indian River, which houses male offenders ages 12-20.

Rehabilitation is a focus of the Ohio Department of Youth Services, which operates the facility, and "psychologists are seen as a key cog in that process," he points out.

"I expect this will be more of a long-term stop for me," adds Bixler, also the father of three young children.

Bluffton's role.
Both through his and his wife's families, he already has long-standing ties to Bluffton, which he credits for helping him grow and gain confidence as an adult and a professional.

"Bluffton provides a very nurturing environment for young people to develop a sense of who they are, and a sense of career and personal development," he says.