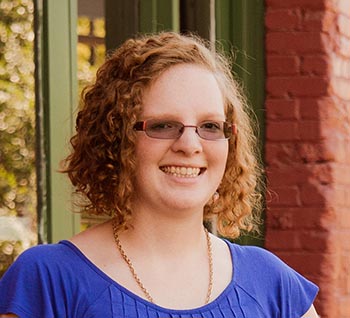 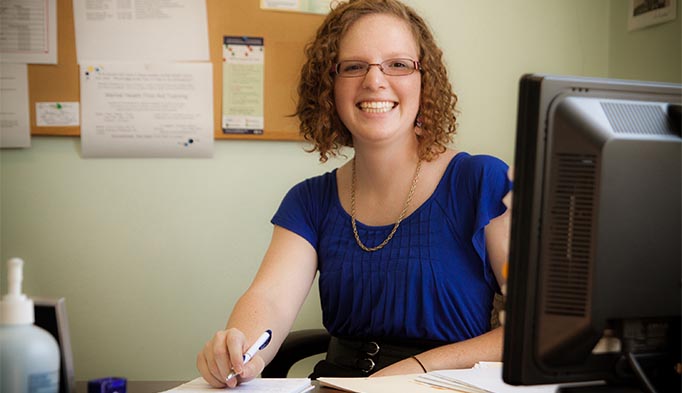 Ask Abbi Stern how she came to work for Health Care for the Homeless in Pittsburgh, and the underlying answer is simple. "That was really a God thing," says Stern, a case manager for the medical nonprofit since August 2011.

And how had she first become interested in social work, in which she earned her Bluffton bachelor's degree in 2010? "That was also a God thing," she explains.

It's not surprising then that as she prepares to marry Shawn Yoder '12 and move to the Columbus, Ohio, area this August, Stern is putting her next career move "in God's hands," she says.

Stern will return to Ohio after three years in her native Pennsylvania, where she had moved following her Bluffton graduation for a year of voluntary service in the Pittsburgh Urban Leadership Service Experience.

Working as an intern at Pittsburgh's Bethlehem Haven women's shelter exposed her to homelessness for the first time. About half of the internship was devoted to interviewing homeless women with children for a national study. "It helped me to be a lot more compassionate to the homeless," she says about the experience.

Nearing the end of her time at Bethlehem Haven— and looking for a new job—she moved into a different office, shared with a night-shift worker she never saw. Until, that is, the night Stern stayed late and her officemate arrived early. Stern learned that the other
woman worked at Health Care for the Homeless during the day and, to fulfill a requirement for her master's degree in social work, was serving an internship at the shelter at night.

The woman subsequently took Stern's resume to her daytime boss, who called Stern for the interview that landed her the case manager position.

"What I'm there to do is go to clinics," which are usually in three-hour blocks, mornings and afternoons, at shelters and drop-in centers, she explains. Anyone who is homeless and/or uninsured may come, without an appointment, to see a physician or psychiatrist. A medical nurse and a mental health nurse are also part of the clinic staff, along with a drug and alcohol specialist
and Stern. In 2012, the clinics served about 6,000 users who were seen during roughly 20,000 visits.

She describes herself as "a resource" for clients, mostly middle-aged men. "My main goal is to get them on medical assistance" so they can receive medication for physical or mental issues, she notes. She also talks to them about their income situation; if they have one, she can help get them into housing.

"Every day is a rollercoaster," says Stern, with some clients screaming at her but others reminding her of the job's rewards. "I have to remember to cherish the rewards because they don't happen as much as you'd like," she says.

With her wedding and move around the corner, she believes "it's time to take a break and step aside" to renew her passion for social work—a passion kindled after her first semester at Bluffton.

Stern recalls sitting in chapel that fall, listening to a visiting speaker relate how God had brought him to be a pastor. "I can't tell you I knew what social work was," she admits, but she started thinking about it and, in the next week, "I ran into social work everywhere" on campus. By the next semester, she was taking classes in a new major.

"The things I was learning in class, the different ways of interacting with and helping people, that was my passion," Stern says. "I just didn't know it."

"Bluffton really encourages students to be who they are and what they want to be," she adds. "That's what I want to portray to clients."